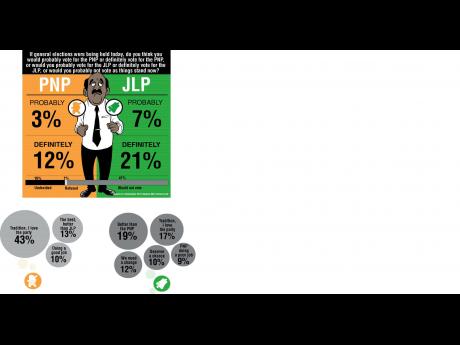 Almost 40 per cent of the persons who voted for the People's National Party (PNP) in the 2011 general election, leading to a comprehensive victory for the Portia Simpson Miller-led team, have jumped ship and would not vote for the party if elections were called now.

A further 14 per cent of persons who ensured Simpson Miller's victory are undecided if they would put their 'X' beside the head - the PNP's symbol - this time around, while 10 per cent say they would probably switch their vote to the Jamaica Labour Party (JLP).

This has given the JLP a comfortable 12 percentage point lead over the PNP in the latest Gleaner-commissioned Bill Johnson poll, conducted on September 6-7 and 13-14, with a sample size of 1,010 enumerated Jamaicans.

The pollster found that 41 per cent of enumerated persons would not vote, 16 per cent are undecided, while one per cent refused to answer.

Using those numbers, the JLP would emerge from a general election at this time with a landslide 60 per cent of the votes cast, with the PNP capturing 40 per cent.

But for pollster Johnson, this is not enough for JLP leader Andrew Holness to begin selecting the members of his Cabinet or for Simpson Miller to start worrying about time on the opposition benches.

"In 2000, the PNP was in real trouble and they turned themselves around and they won very big in 2002. They can certainly recover from here. All they have to do is bring back their people who now say they would not vote.

"The PNP has to start doing something, particularly to create jobs, and that could change its fortune," Johnson told The Sunday Gleaner.

In 2011, the JLP led the PNP 36 per cent to 32 per cent in early December when Johnston tested the pulse of voters, but trailed 36 per cent to 38 per cent two weeks before the general election. That orange momentum continued to the December 29 election day, when Simpson Miller and her team emerged victorious.

However, Johnson further noted that the latest poll, with a sampling error of +3% or -3%, has some other worrying findings for the PNP.

With the PNP only able to count on a fraction of those who voted for the party in 2011, when it captured 53 per cent of the votes cast, it now faces a risk of losing several of the marginal seats it won.

According to Johnson, what the poll is now reflecting is similar to 2003, when after its victory in the 2002 general election, the PNP Government did not impress its base and was badly beaten in the 2003 local government elections.

"What happened in 2003 was that the traditional PNP voter stayed home. This country is so divided that PNP people do not generally turn around and vote [for the] JLP; they just don't vote, … and we are seeing that to the PNP to an alarming extent this year."

There is no such worry for the JLP as 69 per cent of those who voted for its candidates in 2011 are still in its corner, while 16 per cent of the persons who did not vote now say they are behind the Labourities.

However, 30 per cent of those who voted for the JLP in 2011 now say they are not impressed with the Opposition and either would not vote or are undecided, while one per cent say they would switch their vote to the PNP.

"The number of persons who now say that they would vote for the PNP is significantly less than its base, but the JLP is about at its base," noted Johnson.

He argued that maybe it is the midterm malaise or maybe Jamaicans are just fed up with the political process, having concluded that as many as 70 per cent are corrupt. But whatever the reason, almost 60 per cent of registered voters would not cast a ballot if a general election were called now.

"The whole country is in a state of malaise and anomie. People are disaffected, they feel detached, and if you look at the results relating to corruption, … if you feel that 70 per cent of the elected officials are corrupt, are you going to vote?" added Johnson as he noted the spike in the number of persons who now say the would not vote.

"Forty-eight per cent of the persons enumerated did not vote in the 2011 election. Now it is up to 58 per cent who say they would not vote," Johnson pointed out.

Instead, the green supporters, who are eyeing victory after two and a half years in opposition, say the party needs a chance (10%), the country needs a change (12%), and the JLP is better than the PNP (19%).