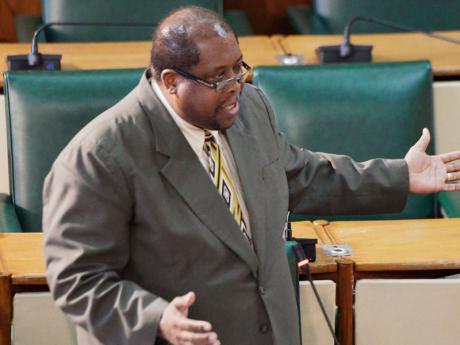 GOVERNMENT SENATOR Lambert Brown parted company with colleague members of a joint select committee reviewing the Sexual Offences Act yesterday in Gordon House, when he declared he could not support a proposal that there should be no conditions that give rise to the offence of marital rape.

Sistren Theatre Collective yesterday stirred a spirited debate on the issue when the group recommended that the current conditions that define marital rape should be removed.

Kimberly Williams, a law student at the University of the West Indies, Mona, who made a submission on behalf of Sistren, said: 'Once sexual intercourse takes place without consent, such should equally be considered rape. This ought to be the case regardless of the relationship between the offender and the victim."

She argued that the effect of the current conditions attached to marital rape meant that the husband may only be considered to have raped his wife in a case where the marriage has effectively broken down.

Senator Alexander Williams said he has no difficulty with the approach recommend by Sistren. His views were supported by committee chairman Mark Golding who said "Rape is rape".

But Brown cautioned that the committee should tread carefully on this issue, noting that the institution of marriage could lead to the "filling out of a form every night for consent".

He said: "To now subject every sexual activity to a potential future claim of rape is not something that you will get me endorsing, and I don't care how many conventions we have signed importing from foreign things ... ."