Keep out! Jamaica bans travellers who have been in Ebola-hit West Africa 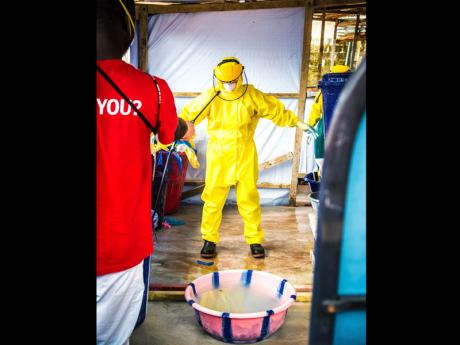 A health-care worker in protective gear is sprayed with disinfectant after working in an Ebola treatment centre in the west of Freetown, Sierra Leone, yesterday. The deadly Ebola virus has infected two people in what was the last untouched district in Sierra Leone, the government said yesterday, setting back efforts to stop the spread of the disease in one of the hardest-hit countries. - AP photo

THE Government yesterday evening announced an immediate travel ban on persons travelling from or through the three West African countries being ravaged by the deadly Ebola virus, hours after an American businessman who spent weeks in Liberia was asked to leave a Montego Bay, St James, hotel where he was vacationing with his wife.

Guinea, Liberia and Sierra Leone are desperately battling to contain the disease that has so far infected nearly 9,000 persons and killed more than 4,500.

The World Health Organization has declared this recent outbreak an international crisis that poses a threat to world health and security.

Jamaica now joins more than 30 countries that have blocked travellers from Ebola-stricken countries.

Yesterday, the Government announced that Jamaican citizens and other residents who have travelled to any of the three affected countries within 28 days of arriving in the island would be quarantined "in the interest of public health and national security".

"The general public is advised that the Government of Jamaica reserves the right to screen all Jamaican nationals," a statement from the Ministry of National Security warned.

The statement also indicated that the ban includes CARICOM nationals, Commonwealth citizens and residents of the three West African countries, as well as all other persons who have travelled to or transited through those countries.

The statement was released late yesterday evening following a high-level meeting between officials from the ministries of Health and National Security, as well as the Passport, Immigration and Citizenship Agency, to discuss claims that the American was allowed into the country without proper screening because health workers placed at the Sangster International Airport in Montego Bay, as the first line of defence against the virus reaching the nation's shores, did not follow proper procedures.

However, in dismissing the claims, the Government insisted that immigration officers followed "the proper protocols regarding screening procedures".

"On his arrival yesterday [Wednesday], the visitor was examined by officials from the Ministry of Health and was found not to be exhibiting any symptoms of the Ebola virus," the statement from the security ministry said.

However, according to sources at Sangster, the American was directed to a medical post set up inside the facility shortly after his arrival.

"They gave him a visual examination but never checked for a fever (one of the symptoms of the virus). He was then cleared to leave [the airport] and later checked into the hotel along with his wife," the source told The Gleaner.

On Tuesday, Prime Minister Portia Simpson Miller had announced that surveillance at the ports of entry was increased and included the acquiring of handheld temperature machines for personnel to use on arriving passengers.

In the meantime, a source at the hotel, who spoke on condition of anonymity, revealed that after the American - who is reported to have business interests in Houston, Texas, and New York in the United States, as well as Liberia - settled into his room on Wednesday night, it was discovered that he had spent six weeks in Liberia shortly before returning to the United States on October 10.

Hotel management reportedly went to the room to speak with the couple while, at the same time, alerting the ministries of Health, National Security and Tourism.

The source said the health ministry responded immediately by sending a medical team to the property. The couple was tested and it was determined that they did not have any Ebola-related symptoms.

The source said the Americans were confined to their room overnight and a second test was conducted yesterday morning, which produced the same result.

However, the source said, by that time, the hotel had already taken a decision, after consultation with the US Embassy in Kingston and the tourism ministry, that it would not accommodate the couple at its property.

The source added that the couple expressed disappointment with the hotel's decision, arguing that they were being treated harshly even though they had been cleared to travel by US authorities. However, the source said, the couple indicated that they understood the public-health concerns.

They departed the island for the US yesterday.

Jamaica's travel ban has been made pursuant to Section 6 of the Aliens Act and Section 4 of the Immigration Restriction (Commonwealth Citizens) Act, which provides the criteria for eligibility for admission of aliens to Jamaica and prohibited immigrants, respectively.

"The Jamaican Government acknowledges the serious threat of the Ebola virus and has taken these measures in the interest of countering the threat to public health and national security," the security ministry's statement concluded.

The Jamaica Defence Force has also stepped up border patrol to monitor and prevent any illegal entry.

CARICOM COUNTRIES which have BANNED TRAVEL FROM EBOLA-AFFECTED AFRICAN NATIONS

St Vincent and the Grenadines