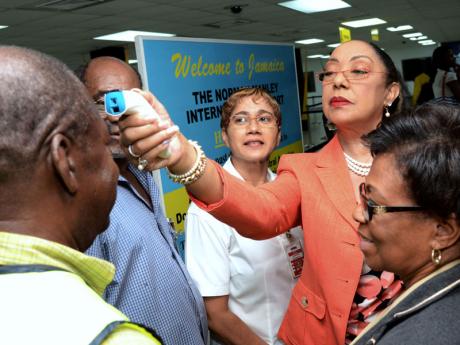 The workers yesterday received four of the first set of handheld laser temperature machines Miller donated to assist with screening of arriving passengers. The machines will be coupled with training to help airport workers deal with any suspected cases of the Ebola virus which may come to our shores.

Valued at approximately US$300 each, Jamaica has received commitments for approximately 20 of the handheld machines from other private donors to be shared among all ports of entry. These will be in place within two weeks.

The country has also received commitment from a private company for at least one walk-through temperature scanner. The scanners will be used at the high traffic ports of entry.

"There is good indication from one corporate entity that they would contribute one of the walk-through scanners and we are continuing to talk to other corporate entities. These will be used at the ports that have very high volume, like the cruise ship pier in Falmouth, where you have over 5,000 persons coming in," said minister of health, Dr Fenton Ferguson, at a press conference held at the airport following the handing over of the handhelds.

During a media walk-through and demonstration of the Ebola preparedness setup at the airport, acting chief medical officer, Dr Marion Bullock DuCasse, explained that after using the temperature machines in addition to other screening procedures, if the medical team identifies a suspected case, that passenger will be immediately escorted to the newly refurbished quarantine and medical post, which is fully equipped with necessary medical supplies, including protective gear. And following a detailed assessment, if the passenger is deemed at risk, he or she will then be escorted through an emergency side exit to a newly refurbished isolation centre on the outside.

At that point, the patient will then be transported by a dedicated ambulance service and crew to the main isolation treatment facility in Kingston.