Nurse of distinction - Ancylin Morgan was born to care 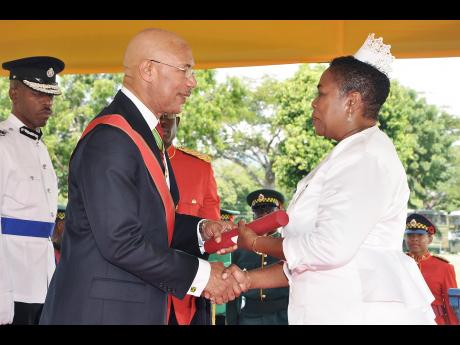 Jermaine Barnaby/Photographer Ancylin Morgan, retired matron at the Cornwall Regional Hospital, is congratulated by Governor General Sir Patrick Allen on receiving her honour for decades of service to the nursing profession.

Ancylin Morgan was brimming with pride yesterday as she stood on the podium to accept membership in the Order of Distinction in the Rank of Officer for her outstanding contribution to nursing during yesterday's National Honours and Awards Ceremony on the lawns of King's House in St Andrew.

"When I found out that I was getting this award, it tore me up a little bit on the inside. I was very excited," Morgan, a past president of the Nurses Association of Jamaica, told The Gleaner.

"I consider this award to be very prestigious in my career and I owe it all to nursing," she added. "I'm so happy that I did nursing and if I had my life to live again I would do nursing all over."

Morgan began her nursing studies at the University Hospital of the West Indies in 1965, graduated in 1968, and immediately began her career in the field.

Now 70 years old, she retired from her post as matron of the Cornwall Regional Hospital 10 years ago.

"I have been in love with nursing ever since I was a child. There was an old lady in my district who was a midwife and I was very fascinated by that. It was from then that I knew I wanted to do nursing."

Morgan said it was a riveting job that has left her feeling fulfilled.

"It is such a great feeling to see your patients get better after nursing them. To know that you can make such an impact on someone's life, to help someone who was in great pain and sorrow is truly a wonderful feeling," she said.

"I am truly humbled by this award and nursing will always hold a special place in my heart."