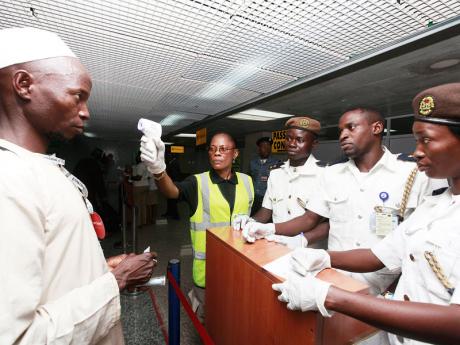 Health port officials use a thermometer to screen passengers at the arrival hall of the Murtala Mohammed International Airport in Lagos, Nigeria, on Monday. AP photo

REELING FROM a storm of criticism in relation to how the Government has handled the chikungunya virus outbreak, Health Minister Dr Fenton Ferguson says the administration is in the process of developing a clear road map to deal with the Ebola virus in the event it lands on local soil.

Ferguson told journalists yesterday that he had intense dialogue with the Jamaica Defence Force on Friday and Saturday of last week on a plan to respond to Ebola.

"Having moved the response to a national level, significant discussion is taking place with the critical stakeholders such as Jamaica Customs, immigration, and the army," the health minister said during a press conference to announce a $4.3-million donation from Sagicor to purchase a fever-scan machine for installation at the Sangster International Airport.

Ferguson sought to assure Jamaicans that the country now has protective gear in the event a person carrying the Ebola virus arrives in the island.

However, Ferguson said he did not wish to name the entities that have purchased the gear.

"If there is a case, we would be in a position to respond," he added.

The health ministry said it was also in the process of procuring additional supplies from abroad in addition to supplies that are expected from the Pan American Health Organization.

Dr Kevin Harvey, acting permanent secretary in the Ministry of Health, said some training has already been provided for staff at the ports of entry, health-care workers, and those who would have to dispose of the bodies of Ebola victims.