Jamaica on road to recovery after JLP wrecked the economy -Phillips 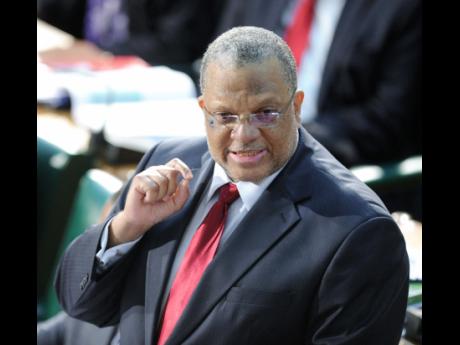 Finance and Planning Minister Dr Peter Phillips says the country is now undergoing a process of economic reform, which has launched it on the road to economic recovery.

"We have started an economic-reform programme built on the following objectives: achieving sustained economic growth; achieving debt sustainability; securing job creation and poverty reduction; and improving the living standards of the population."

Phillips said the current PNP administration has every reason

to be proud of its record of achievement and for presiding over a process of economic reform that has won the admiration and respect of the international community.

"I dare say that the Government, led by Prime Minister Portia Simpson Miller, has undertaken public-sector reform and has met all the obligations that Jamaica signed up to and has passed five consecutive quarterly reviews of the IMF (International Monetary Fund)."

The finance minister was, however, quick to point out that over the past 40 years, the country has failed to effectively marshal its fiscal situation, leading to stunted, or little, growth in the economy.

"The sad truth is that over 40 years, our economy has failed to grow in any sustained way, averaging less than one per cent growth per annum. Over the same period, our public debt has expanded more than 600 times. It is as if we have sought, as a country, to borrow our way to a brighter future. We cannot build a nation by spending and borrowing and being at the mercy of others," he said.

Phillips also took a swipe at the previous Jamaica Labour Party (JLP) administration, arguing that the country could not forget the economic chaos and situation that prevailed when the PNP assumed office in 2012.

"It was a time of confusion. On the economic front, the economy was in shambles. The [JLP] Government had abandoned its commitments under the then standby agreements with the IMF," Phillips said.

He went on to outline what he said were activities that the Bruce Golding administration undertook to the detriment of the economy and the country.

by the mismanagement of the

then administration. In four years, that administration changed three ministers of national security, three police commissioners, three financial secretaries, and I would not even mention that there were two prime ministers in the short four years.

He said the major impediment to growth in the country has been the size of the public debt. With a debt-to-GDP ratio of 146 per cent of GDP in 2012, Jamaica was ranked among the most indebted countries in the world.

Phillips indicated that the situation is, in fact, changing.

"The public debt is down, growth has returned Ö . STATIN's (the Statistical Institute of Jamaica's) latest figures for the quarter ending June 30 raise the growth figures of that quarter; unemployment is down close to three per cent year on year; inflation is still between seven to nine per cent; and the Net International Reserve, which, two years ago, was less than US$700 million and falling, today is more than US$2.2 billion," Phillips said.