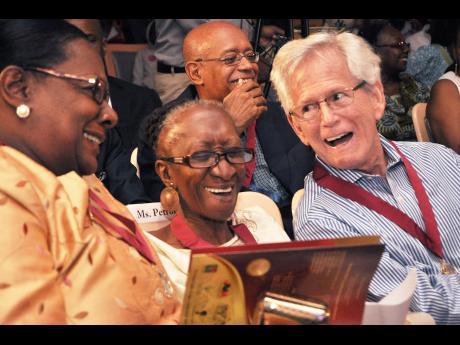 Nine distinguished Jamaicans yesterday received Musgrave Medals during the annual Musgrave Medals Award Ceremony at the Institute of Jamaica (IOJ) in downtown Kingston, as part of its celebration of Heritage Month.

In keeping with the IOJ's mandate "for the encouragement of literature, science and art" in Jamaica, three gold, three silver and three bronze Musgrave medals were presented to the 2014 awardees for their achievements in the artistic, scientific and literary fields.

A special kind of award

"This is an important occasion for recognising a particular group of people who make a major contribution to this country. There are areas in which these awardees excel which perhaps wouldn't rise to the level of a national award, but I

think it is a special kind of award," Ambassador Burchell Whiteman, chairman of the IOJ Council, told The Gleaner.

"It's a little different from the national awards, but I think it has a special place historically, as these awards were created long before we became independent. It is really a connection with our past history and our heritage, so I really value it for that reason," he continued.

Sculptor Petrona Morrison, who received the Gold Musgrave Medal for her contribution to the fields of art and education, said she was elated at the honour.

"This is really overwhelming because to be recognised at this level among other distinguished awardees is a great honour for me," said Morrison, director of the Edna Manley College of the Visual and Performing Arts. "I think it is really good to receive recognition for what you have always wanted to do and to be thankful and grateful for that."

Also collecting a Gold Musgrave Medal was author and playwright Anthony Winkler, who is best known for writing the Jamaican classic, The Lunatic.

The group of gold recipients is rounded off by chair of paediatrics, University of the West Indies, Mona, Professor Celia Christie-Samuels, who has presented several academic papers and books on paediatric infectious disease.