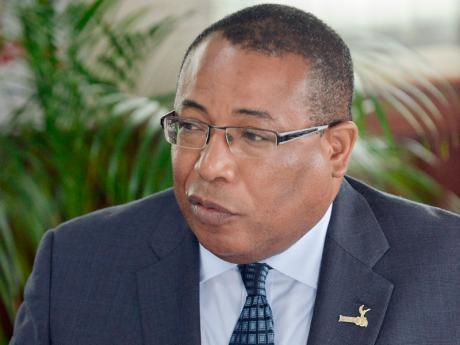 A trade enforcement team, set up to ensure that the treatment meted to Jamaica is fair and balanced under its trade agreements with other countries, is to be unveiled by Industry, Investment and Commerce Minister Anthony Hylton.

Addressing a Gleaner Editors' Forum held yesterday at the newspaper's North Street offices in Kingston, Hylton said he would be exercising options contained in most trade arrangements in which Jamaica participates.

The minister disclosed that there was maneuvering space in what he termed "cottage industries".

"That's one of the areas in which you can make some exceptions and provide some levels of protection on a time-bound basis," said Hylton. "In the application are areas that we want to pull back on."

He, however, stressed that considerations in this regard must not be self-defeating.

"Remember when you do that you are giving the other person a stick to beat you," he said.

Hylton divulged that he would shortly be formally announcing that the enforcement team in his ministry would focus on enforcing Jamaica's trade agreements.

"A trade agreement represents a balance of benefits and if somebody is taking advantage and imposing burdens on you, a number of things are likely to happen immediately and in the long term," said Hylton.

"We have built the team, which has done some work, and you are going to hear the results of some of that work and how I think we can act consistent with our obligations," he added.

When asked whether the establishment of the trade-enforcement team was influenced by trade concerns involving CARICOM partners, notably Trinidad and Tobago, Hylton responded: "No comment".

Hylton added: "It's one of the reasons that I am no longer at Foreign Affairs and Foreign Trade ... . I am not only a diplomat."

He also declined to divulge the name of the person who heads the team.

Trinidad and Tobago benefits substantially from its trade arrangements with Jamaica, with the twin-island republic ranked second in the list of top-10 trading export partners with Jamaica, behind the United States.

Japan, Brazil and Venezuela, the latter with which Jamaica enjoys a special arrangement called the PetroCaribe Agreement, round out the top five. The top-five import partners are the United States, Venezuela, Trinidad and Tobago, China and Mexico.

Numerous impasses with Trinidad have drawn the attention of many political and business leaders in both CARICOM states.

There was a Jamaica patty war with Trinidad that came to a head in 2009.

At its root was what some describe as non-tariff barriers imposed against Jamaica under the guise of the World Trade Organization's sanitary and phytosanitary (SPS) guidelines, concerning food safety.

Then, for the past few years, the trade disputes have evolved into immigration battles as Jamaicans have been turned back in droves from the Piarco Airport in the Trinidad capital, Port of Spain.

At the heart of the disputes are said to be issues of transparency and fair play within the context of the CARICOM Single Market and Economy (CSME), designed to facilitate intra-regional trade.

Trade accounts for approximately 50 per cent of GDP, yet Jamaica imports most of the goods it consumes, leading to consistent trade deficits of around 20 per cent of GDP.