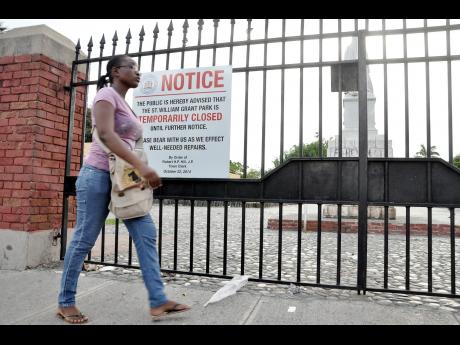 Jermaine Barnaby/Photographer A pedestrian walks by the closed gate of the St William Grant Park in downtown Kingston.

The St William Grant Park in Kingston has been temporarily closed to the public for two weeks as the Kingston and St Andrew Corporation (KSAC) effects critical infrastructural repairs to the facility.

The KSAC will also be seeking to get a grip on the management of the park, the breakdown of which has led to theft and vandalism of public property.

Town Clerk Robert Hill told The Gleaner that the park's temporary closure was necessary, as the KSAC was struggling with the loss of property.

"People have come into the park and stolen pumps, stolen pipes, stolen electrical items. They have even stolen bulbs. Not only that, they have also diverted electricity from the park, so the closure is necessary to bring the park into some semblance of public order and proper management of our resources, so that they are not wasted, damaged, stolen or vandalised," said Hill.

The park was last refurbished in 2010, at

a cost of $121 million. However, Hill argued that since then, the park's infrastructure has again fallen into disrepair.

"We have critical plumbing and electrical repairs to do. We have maintenance issues that we have to address immediately. We have trees that have to be pruned and [there is

the need for] a general facelift of the park

in order for it to be maintained in a way that is expected from the public, so this had to be done," he said.

While unable to say how much these repairs will cost, Hill was adamant that the they were of significant importance and would be done within budget.