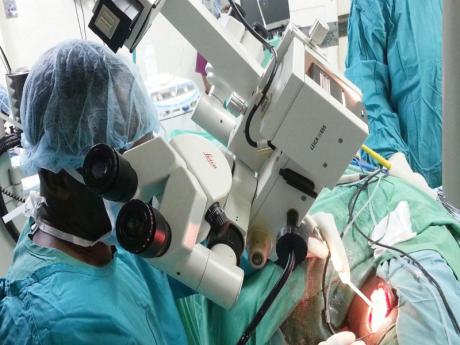 Members of the medical team conducting a successful surgery to remove a tumour from the brain and ear of a middle-aged woman. 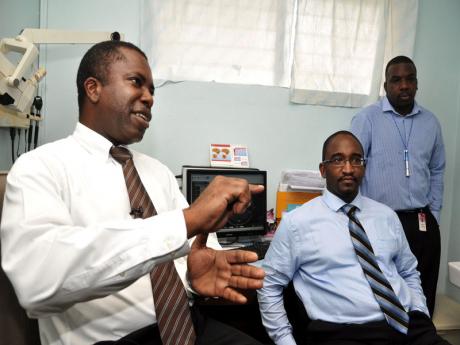 Jamaica's largest trauma centre - the Kingston Public Hospital (KPH) - often makes the news with stories that are unpleasant and uncomplimentary to the cadre of medical talent at the facility.

But two weeks ago the stars of the KPH shone brightly as three doctors, consultant neurosurgeon Mark Morgan, consultant ear, nose and throat (ENT) surgeon Guyan Channer, and ENT chief resident Phillip Brown successfully removed a tumour from the brain and ear of a middle-aged woman referred to the hospital.

This was the first time a surgery of this type was being done in Jamaica and the Caribbean.

"The surgery was a combination of brain and ear surgery where a portion of the tumour was in the cranial cavity (inside the brain itself), and that's where the neurosurgeon gets involved in the operation," said Morgan during an interview at the KPH last week.

"The patient had a tumour coming from the vestibular nerve, which is a nerve that runs from the stem of the brain to the ear. So you can see why we would have ENT and neurosurgeon," added Morgan.

He said while there are circumstances where a neurosurgeon with training in ENT could have performed the surgery alone, the presence of the specialist ENT surgeon augurs well for greater success of the operation.

"The tumour was not malignant (cancerous). It was located where there was a lot of cranial nerves that supply various parts of the face and throat that deals with swallowing and facial movement. This tumour was also very close to the stem of the brain and when it puts pressure on the brain stems, there are serious consequences," explained Morgan as he noted that the woman's condition was very rare.

Channer specialises in otolaryngology (treatment of diseases of the ears, nose and throat, as well as structures of the neck and face) and neurotology which deals with medical cancers of the head and neck, ear infections, and problems with nerves of the face. He noted that the patient suffered for several years with hearing disorder and presented a twisted face.

"The ear, as the public knows, is the holes that one can see at the side of the head. We went just behind that hole to avoid cosmetic issues with the patient. One could say we went through the bone of the ear," explained Channer, who noted that his expertise, coupled with the neurosurgeon, was needed for the surgery.

"She presented with hearing loss, ringing in the ear, and also because she had late stage disease, she had significant brain stem compression. Actually, more than 50 per cent of her brain cells were being compressed and she presented with dizziness as well.

"When we did the MRI, it was kind of bittersweet for her, because at that time she finally had an answer to what was happening with her."

Channer noted that the woman had been suffering for several years.

"Her twisted face was as a result of the tumour's effect on her facial nerves and should not be mistaken for a stroke," cautioned Channer, as he argued that it is important that some individuals diagnosed as having a stroke seek additional opinion as they may have a tumour in the ear or close to the ear in the region of the brain stem.

"In this patient's case, it was close to the brain stem. I am pretty glad she decided to have it checked out instead of reassuring herself that it was only a stroke."

The surgery option chosen by the team was discussed with the patient, who along with her family decided to proceed.

"Family support is very important, especially where there is a high mortality rate. We discussed with the family various pros and cons, the expected outcome, and family members were there with her throughout, "he said.

"When the tumour reached the size like hers did, about six centimetres circumference, the only option was surgery. Based on her MRI there was no observation or no giving of medication," stated Channer.

With the surgery successful the woman has since been discharged, but her hearing has not been restored as the impact of the tumour was too far gone.

After the successful completion of the 12-hour surgery, Dr Andrei Cooke, chairman of South East Regional Authority, did not hesitate to praise his staff, especially the doctors.

"Despite the challenges faced by the health sector in these austere times the greatest asset we have is our staff. We have many superstars carrying our first-world management at the KPH. These three doctors are among the superstars we have here," Cooke told The Sunday Gleaner.