Cuba to the rescue - Neighbour to help Jamaica in Ebola fight 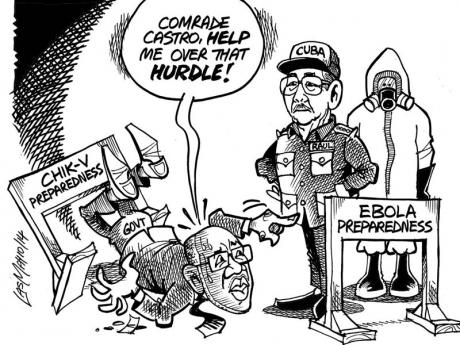 The Cuban government is next week scheduled to begin a comprehensive plan to assist Jamaica with its Ebola preparedness and response as the world continues to grapple with the deadly disease that has infected more than 10,114 persons and killed 4,912.

Two Cuban experts will travel to Jamaica to conduct a two-week training programme for health-care and other frontline workers. Additionally, 30 Cuban health-care workers will arrive in Jamaica next month to work alongside Jamaica's health team and other Cuban health workers already in the island.

"The training will involve all persons on the frontline, including health workers, persons from the JDF (Jamaica Defence Force), [Jamaica] Fire Brigade, Immigration and Customs, etc. Essentially, it will be training of trainers. Their expertise will aid in all facets of preparation for this Ebola response," said Health Minister Dr Fenton Ferguson.

Making the announcement yesterday at the health ministry's Kingston offices following a trip to Cuba with a group of delegates to discuss a partnership agreement between both countries, Ferguson noted that Jamaica had already started the training of workers in essential services in best practices to deal with Ebola.

"I met with my counterpart, Cuban Health Minister Dr Roberto Morales Ojeda, and we were able to view many of the systems now in place in Cuba to deal with the Ebola virus," said Ferguson, who returned to the island on Sunday.

Following extensive discussions and a tour of the Pedro Kouri Institute of Tropical Medicine - the agency through which all of Cuba's Ebola activities are being managed - both countries set up a memorandum of understanding (MOU), with Cuba making several commitments to Jamaica.

Since the Ebola outbreak that has been ravaging countries of West Africa, especially Liberia, Guinea, and Sierra Leone, the Cuban government has played an active role in helping to stop the spread of the disease.

Cuba has sent 256 health-care workers into the worst-affected areas to assist in the fight.

Under the MOU, Cuba will share information daily with Jamaica on the progress of the Ebola response in West Africa and other important information to help with Jamaica's decision-making process.

"Cuba has expressed a willingness to work with Jamaica and the broader CARICOM region on any Ebola treatment options they are partnering on. So if there is any research being undertaken relative to a vaccine or any treatment, I have indicated that we would have more than a passing interest in that," Ferguson stated.

Dr Kevin Harvey, acting permanent secretary in the Ministry of Health, added that Jamaica had a history of working with other countries on vaccine development for infectious diseases, including both the rotavirus and HIV vaccine trials, among others. There was also an attempt at having Jamaica participate in a chikungunya (chik-V) vaccine trial.

"Cuba has also agreed to deploy doctors and nurses to assist in the response in the event that Jamaica experiences an outbreak of Ebola," stated Ferguson.

Noting that Cuba has agreed to facilitate a special appeal for CARICOM to launch a regional response to Ebola, the health minister said the approach would go a long way in enhancing each country's preparedness and response.

"As we have seen with chik-V, malaria, and cholera, if one country in the region is affected, we are all at risk. Ebola is a deadly disease, and as we have done at the country level, we have to ensure that we have all hands on deck at the levels of the regions. Our strength will depend on our ability to unite for this important effort," he said.

A Cuban expert is also expected to visit Jamaica to share best practices for vector control to deal with dengue fever and the chik-V currently spreading across the island.

"The Ministry of Health will continue to lead the process, and we have been steadily making progress with our preparations for Ebola. What I want to say to the country is that we must be in a position that if a case were to come now, we would be in a position to respond. That is what is important," Ferguson stated.

"As we continue our Ebola preparedness and response activities, I urge everyone to continue to assist the Ministry of Health to protect you, your family, your community, and our country from Ebola."

The 2014 outbreak of the Ebola virus has also found its way to Nigeria, Senegal, Mali, Spain and the United States. Senegal and Nigeria have now been declared Ebola-free.