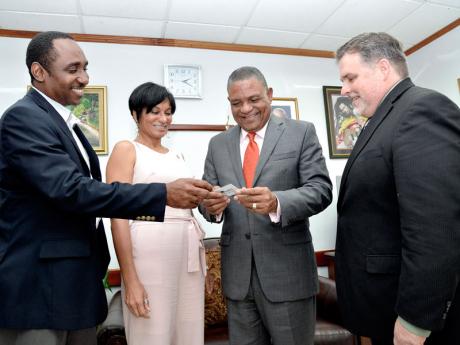 Horace Dalley (second right), minister without portfolio in the Ministry of Finance and Planning, inspects a ganja business card after a meeting yesterday at the finance ministry in Kingston with Oneil Grant (left), president of the Jamaica Civil Service Association; Wanda James, of the Cannabis Global Initiative in Colorado; and Jeff Wells, president and CEO of Franwell in Florida. Norman Grindley/Chief Photographer

A Colorado-based firm with legal and regulatory expertise is in Jamaica engaging the Government and United States representatives on the way forward in the move to decriminalise the use of small quantities of ganja on the island.

Instrumental in creating a regulatory framework for the marijuana industry in Colorado, Franwell Incorporated has been accompanied to Jamaica by the Cannabis Global Initiative (CBI), which is more familiar with Jamaica's efforts to decriminalise the use of the weed.

Both Jeff Wells, the president and CEO of Franwell, and Wanda James, of CBI, are suggesting that in forging ahead, Jamaica needs to create a ganja industry to streamline the use of the weed for recreational and medical use and rake in much-needed tax revenue.

"If there is a fear of it being out of control, we can help with this framework to move things along much faster and give politicians a more secure feeling about implementing a retail industry, especially for recreational use," Wells told The Gleaner shortly after his arrival in the island on Monday.

Wells was responding to the revelation that the majority of Jamaicans believe the Government was being too tardy in moving ahead to enact new ganja laws, according to a recent Gleaner-commissioned Bill Johnson poll.

Wells disclosed that his company won the bid in 2010 to provide Colorado with a complete regulatory framework and reporting system for the marijuana industry.

"This is working very well," he said.

For her part, James suggested that with ganja being long associated with Jamaica, the weed could inject millions, if not billions of dollars, into the limping economy.

She disclosed that Colorado is projected to sell 133 metric tons of marijuana in 2014, racking up approximately US$600 million in sales and raking in US$70 million in taxes.

"All of this is on target," she said.

James told The Gleaner that the teams had met with several government officials, including Justice Minister Mark Golding; National Security Minister Peter Bunting; Horace Dalley, minister without portfolio in the Ministry of Finance; and Damion Crawford, state minister in the Ministry of Tourism and Entertainment.

They are also scheduled to meet today with Science, Technology, Energy and Mining Minister Phillip Paulwell and Minister of Industry, Investment and Commerce Anthony Hylton, as well as officials of the United States Embassy in Kingston, and members of civil society and academia.

"What we are bringing to the island right now are the tools to be able to move forward with legalisation to be able to regulate the sale of cannabis [for] medicinal and recreational [purposes]," said James.

Added James: "We are seeking to give the Government an opportunity to allow growers in the island to participate in the sale of ganja through a cooperative to ensure that they make a profit."

She said focus was also on resorts to start selling the weed to tourists.

"We are trying to put this in place to show the Government how this can be done."

James expressed confidence that this move would immediately bring in tax revenue and expressed satisfaction that all parties were "amazingly receptive".

"I think there is an appearance of stalling because the Government can't envision how to move forward," she said. "It seems to me that everybody is willing to have this happen. They understand that the revenues are there, but then how can they regulate it so that it works for tourism, growers, and it does not get into the hands of children, even as it helps in medicinal values?"

Added James: "We want to be able to show the island how we have done that in Colorado, through technology, and to bring that here to the island."