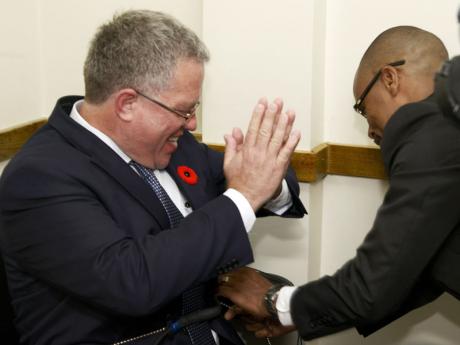 Canadian High Commissioner Robert Ready (left) is fitted with a polygraph unit by Detective Sergeant Michael Thompson as part of a demonstration during a tour of the newly opened polygraph centre at the National Police College at Twickenham Park in Spanish Town, St Catherine, yesterday. Gladstone Taylor/Photographer

CONSULTATIONS are currently taking place with key public-sector employment regulators on how best to implement a targeted lie-detector system in sensitive areas of the state apparatus.

National Security Minister Peter Bunting said yesterday the Cabinet had taken the decision that polygraphing is to be extended beyond the security forces, and should also be a requirement for key posts in ministries such as finance, national security, foreign affairs, and the Office of the Prime Minister.

"It is important that we gradually put this out as another preventative barrier … [for] persons who have that sort of intention … [in] the system, or certainly not [getting] in key positions in the system," Bunting told The Gleaner.

The minister said not having trustworthy people in key positions in the selected ministries would represent "strategic vulnerabilities".

In a thinly veiled reference to operations by the Major Organised Crime and Anti-Corruption Agency (MOCA) at the Accountant General's Department earlier this week, Bunting said not having people of impeccable character in certain positions could be to the detriment of the country.

"As we see with recent events, it is not within the security forces that you see corruption. Corruption in ministries like finance can cause tens of millions of dollars per individual or per ring that is involved in corrupt activities," he argued.

Oneil Grant, president of the Jamaica Civil Service Association, said he was in support of the general principle of a national vetting policy, but added that he was not certain polygraphing was the way to go.

Grant, however, said the union was fully behind the principle of ensuring government employees are above suspicion.

"Many public officers work in very sensitive areas and that is why we have certain rules that govern how we even share information. There are certain functions that public officers carry out, which, by virtue of their association, can put them in a very compromising position. We have known of public officers who have been brought under significant pressure from the underworld because of who they are and because of associations with these persons," Grant said.

"We have to ensure that these persons stay in line and keep the public sector sanitised," he added.

Meanwhile, Bunting said the Government was in dialogue with the Public Service Commission and the Office of the Services Commission to look at how the policy can be implemented.

Having selected the key ministries that will be the subject of the extended use of polygraph within the Government, Bunting said the next step would be to identify those key positions. He said vetting for these positions will have to be done frequently, "annually, or if there is any cause for concern".

He conceded, however, that from an industrial-relations perspective, "it would be hard to make it a condition to hold a job for somebody who is already an incumbent".

Said the minister: "Then it might be on an entirely voluntary basis, unless there was specific legislation passed. We have not reached the stage of determining whether legislation is necessary, and this is something that we are going to roll out over the next few years."

Grant said that when consultations on the matter were held two years ago, the proposal was that incumbents who do not subject themselves to the vetting could either be transferred to another less-sensitive post or be retired in the public's interest.

He said the union would now have to consider whether a national vetting policy for public-sector employees would infringe on any of their rights.

Bunting, meanwhile, noted that the vetting process is not a "once and for all and forever" application, arguing that a person might pass a polygraph test today and is corrupted down the line.

He conceded that the policy decision was not data-driven, but one which relied on a qualitative approach.

"What you do is an assessment of certain positions with high responsibility, where, if you had a corrupt person in that position, the damage that they can do … financially, to national security, or some other policy interests," Bunting said.

The minister further pointed to the growth-inducement strategy of the Planning Institute of Jamaica, which identified corruption "as a major impediment to rapid growth and development".

He said: "It is something we have to address. Resources are obviously constrained but in putting resources against the problem … put it where it would have the highest impact."

The movement toward realising the dream of removing corrupt persons from the public sector took on added importance yesterday, when a state-of-the-art polygraph centre, with two control rooms and six suits, was opened at the police staff college at Twickenham Park in St Catherine.

The facility, which also has dormitories and a conference room, was constructed and outfitted at a cost of more than US$1 million, Bunting said.

The Canadian and United States governments contributed to the project, as well as to the training of polygraphers. There are 15 polygraphers in the system and four more being trained.