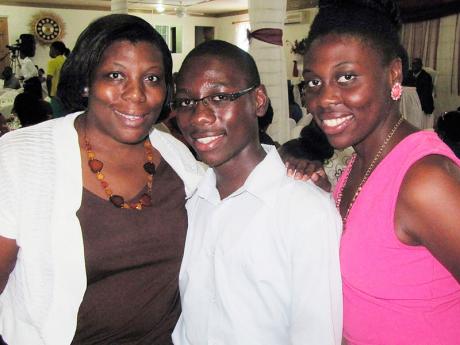 Fitzroy Wickham is flanked by mom, Florence (left), and sister, Kimberly, at an awards function earlier this year. Photo by Carl Gilchrist

Wickham sat and passed 12 subjects at grade-one level, including 11 distinctions.

"I expected to do well, but not this well, to be top-performing student," he added.

Earlier this year, Wickham received an award from member of parliament (MP) for North West St Ann, Dr Dayton Campbell, during the MP's annual top achievers award function. He was accompanied then by his mother, Florence Wickham, and sister, Kimberly, both of whom have supported him along the way.

"My mom is overjoyed. It took a while for it to sink in, but she's overjoyed," he said. "My sister is also feeling good."

York Castle principal Raymond Treasure was elated at the success of his student.

"We've spent some time motivating the students to rise and achieve something like this," Treasure told The Gleaner.

"Fitzroy is an exceptional student, and I am happy he is returning to York Castle (sixth form), because he will now serve to motivate students here at York Castle and other schools around. This achievement is testimony to the kind of work we have been putting in."

"I wish to wholeheartedly congratulate the youngster on his achievement and I want to emphasise that with proper parenting, there's no limit to what a child can achieve," Campbell stated. "I must also commend his mother for her support along the way, and also the York Castle family."

Campbell highlighted the fact that Wickham is also involved in community activities, including being part of his medical team that delivered free medical checks to more than 1,000 students in his constituency during the summer.

Wickham is also both the St Ann and All-island Champion in the 15-20 age group of the Jamaica Library Service Reading Competition for this year.

Campbell said he plans to continue providing support to Wickham and other top academic achievers in his constituency.

He wants to become a neurosurgeon.