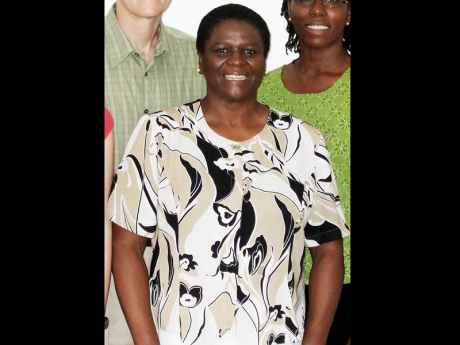 Jamaican medic Dr Coril Curtis-Warmington has urged colleagues in Jamaica to join her in Liberia, one of the countries at the epicentre of the Ebola outbreak, to get first-hand experience in treating the deadly virus which has already claimed more than 5,000 lives.

Curtis-Warmington made the call last Friday as she spoke by Skype from Liberia to the 10th annual scientific symposium and general meeting of the Caribbean Association of Clinical Microbiologists, held at the University Hospital of the West Indies.

"It is not easy, but even short term, just for two weeks. Please consider it because we really need you," she begged in her final comments at the end of the 45-minute link.

Whispers of "who, me?" were immediately heard from medical professionals following the plea, but Professor Marvin Reid - who chaired the live interview session - promised that as vice-chair of the Medical Association of Jamaica, he would present her call to his colleagues.

Curtis-Warmington said she first went to Liberia in 2006 as part of a Christian medical and non-medical missionary group, and while the Ebola outbreak has affected the work of the group, the members are not daunted.

"It has deepened the work of the group. Yes, it has curtailed us in advancing some of the programmes that we target, but it has really been a booster for our programme," she said in her opening comments on the effect of Ebola on the work of her missionary team.

According to Curtis-Warmington, Liberians are appreciative of the "genuineness of us being here to work alongside them ... . We want our colleagues in Jamaica to know that it is not just being in another country.

"We are really here to work side by side our Liberian colleagues and our brothers and sisters," she stated.

When Reid asked about the challenges being faced in dealing with Ebola, given the fear among health professionals here, Curtis-Warmington charged that fear was as much to blame for the death toll as the virus itself.

"It is the fear that caused the deaths of most persons who suffer from Ebola. The fear of those who are taking care of them, and because we recognise early and hopefully very quickly, we were able to save a lot of persons from dying," responded Curtis-Warmington, who did not say when she would return to Jamaica.

Two weeks ago, there was pandemonium at the Mandeville Regional Hospital when news spread that a Nigerian national showed up at the hospital with symptoms which initially appeared similar to Ebola.

For more than nine hours the man was isolated in a room in the accident and emergency department, even though he had provided health professionals with information that should have made it clear he did not have Ebola.

After an assessment, it was found that the man was suffering from food poisoning.