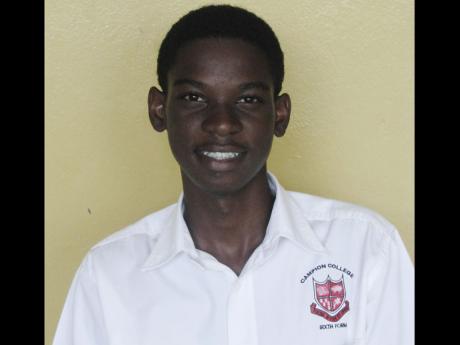 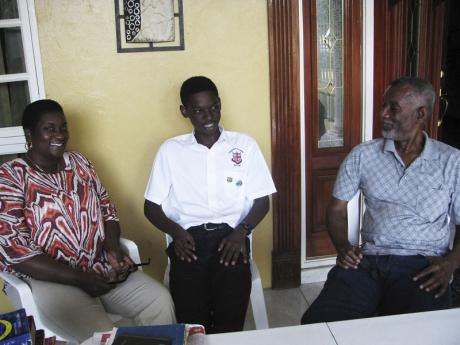 Jabari Hastings at home with his father, Lynval, and mother, Heather. - Photo by Edmond Campbell
1
2

This brilliant Campion College student has distinguished himself by topping Jamaica in geography, mathematics, additional mathematics, physics and chemistry, while placing second in information technology and third in technical drawing in CSEC. He sat 10 CSEC subjects getting distinctions in all with straight 'A' profiles.

He won the Avinash Potluri Scholarship for being the top boy in CSEC at Campion.

While chalking up impressive achievements locally, the young academic has also featured prominently on the Merit list in the Caribbean in seven of the 10 subjects he sat, placing first in geography, sharing first position in mathematics, second in chemistry, fourth in additional mathematics and information technology, sixth in technical drawing, and seventh in physics.

In fifth form, Jabari also stepped up to the plate and challenged himself to pursue pure mathematics at the Caribbean Advanced Proficiency Exam (CAPE) level and placed fourth in Jamaica in Unit 1 of the exam.

Jabari is currently pursuing studies in six CAPE subjects, including Spanish, communications studies, pure math (Unit 2), physics, and chemistry. "I am trying to finish the pure math (Unit 2) this year and take on applied math because I think that's the only other math course offered at CAPE and it will help me to get a wider understanding of mathematics."

Commenting on his approach towards CAPE, Jabari declared: "Prospects look pretty bright. So far, the work has not been very challenging; it's a step up from CSEC, but I think I am settling in fairly well and the goals are the same as before, trying to do extremely well."

In doing his analysis of the Merit list for CAPE in the Caribbean, it has not escaped the emerging scholar that his Trinidadian counterparts have dominated the list, especially in physics and chemistry. "I hope that this year I can be that Jamaican that tops those Trinidadians," he quipped.

The easygoing, articulate sixth-former says he strives to make excellence a way of life. "Growing up, mom and dad always tell us that, as a member of the Hastings family, we should always try to live in unity and in love, and we should always strive for excellence. We had to say it, we had to know it, and eventually it becomes a part of you."

He explains that after a while, the family creed was no longer an expression from his parents to be recited, but it had soaked into his consciousness that the decision was his to determine his own future.

Noting that there are brilliant students at Campion, Jabari says he did not top his class at all times over the years, but admits that he enjoyed the tough competition.

Displaying exceptional talent in mathematics, the young scholar says the subject only becomes difficult based on one's perspective. "If you approach it with a mindset that you are not going to find solutions, you probably aren't. For me, mathematics is my playground, because you get to try and solve puzzles, you apply what you know in creative ways to get solutions, and the Jamaica Mathematics Olympiad, which The Gleaner sponsored, also provided that opportunity."

Jabari participated in the Jamaica Math Olympiad from grades nine to 11 and came first, fourth and third in the respective grades.

Still undecided on his career path, the bright spark indicates that engineering and information technology might be strong options.

He has also immersed himself in voluntarism by helping to prepare students from inner-city communities for the Grade Six Achievement Test, an exam he remembered quite well, as he became the top boy in 2009 while attending Vaz Preparatory School in east Kingston.

Jabari's father, Lynval Hastings, said it is "heartwarming" to see how well his children have been doing. Noting that he has sought to instill in his children the virtues of humility. Hastings said that as a parent, he has had to be trying to rein himself in at their outstanding achievements.

The family also had reason to celebrate at the magnificent performance of Amara, Jabari's older sibling, who aced the five subjects she sat in the CAPE Unit One with distinctions.