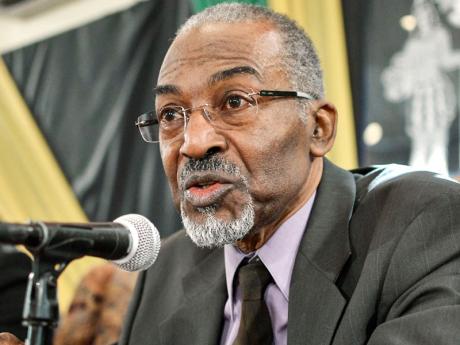 NHT chair blanks increasing calls for him to go

Despite mounting calls for his resignation as head of the board of the National Housing Trust (NHT) over the controversial Outameni property purchase, Easton Douglas says he is going nowhere, at least not until that call comes from the person who appointed him - Prime Minister Portia Simpson Miller.

With news emerging this week that a senior member of the Simpson Miller administration has suggested to Douglas that he should resign to protect his reputation, the former government minister was firm as he told The Gleaner that he has no plans to heed the resignation calls.

"I have not done anything wrong, legally or morally, so I do not see a reason to resign," declared Douglas, as he declined to comment on the reported call from his former Cabinet colleague suggesting he resigns.

An animated Douglas scoffed particularly at members of the Opposition and former fellow board member Dr Davidson Daway, who have been calling for his head over the $180-million purchase of the site of the debt-ridden attraction.

"It would be in the best interest, not only of the portfolio minister but also the interest of the members themselves, to recuse themselves from that board so that things can move forward," said Daway in an interview with Nationwide News earlier this week.

However, Douglas, who ushered the purchase through the meetings of the board, is not daunted.

"I believe it is a sound investment that is capable of realising the plans and objectives of the NHT, given the opportunity this purchase offers," added Douglas.

The 78-year-old urban planner and three-time member of parliament for South East St Andrew, where a road is to be named in his honour shortly, argued that he has much more to offer the NHT and, by extension, Jamaica.

"This is not arrogance, but I believe that I have an additional contribution to make to the country. There is much more to be done at the NHT, including increasing the supply of low-income housing which has just started," declared Douglas.

He noted that as a government town planner, he was a part of a team selected by then Prime Minister Michael Manley and then Minister of Housing Anthony Spaulding to visit Mexico in 1974 to look at a programme that was being done there which was similar to the proposed NHT.

"The United Nations Human Settlement Programme was just getting started and the late Gloria Knight, Fitz Ford, and I went to Mexico and worked out how the NHT should operate, so now there is a combination of service, happiness, and my own feeling that I have a further contribution to make," said Douglas, as he turned to the resignations which have hit the board since he was appointed.

Two members of the board - opposition senator and trade unionist Kavan Gayle and fellow trade unionist Helene Davis-Whyte - resigned this week, as the Outameni controversy deepened, leaving the board with the minimum of nine that it needs to operate.

The board, which must be of a maximum of 17 and a minimum of nine, had already been under-manned by the resignations of Daway, the Reverend Oliver Daley, Deborah Martin and banker Minna Israel in 2013 after the dismissal of Managing Director Cecile Watson

Yesterday, word surfaced that another board member, Brenda Cuthbert, who has been silent throughout the controversy, could also be on her way out.

But Douglas can depend on other board members Lambert Brown, Vincent Morrison, Oneil Grant, Norman Horne, Percival Latouche and the representative of the Office of the Prime Minister, who is now Sonia Hyman, to stay on.

Robert Buddan, the ninth remaining member of the board, is also likely to stay on.

"If there is another resignation, we will not have a board so it will be up to the prime minister," noted Douglas.