Lemon grass and ginger products are consumed or used as bath preparations or medicinally. - Contributed photo 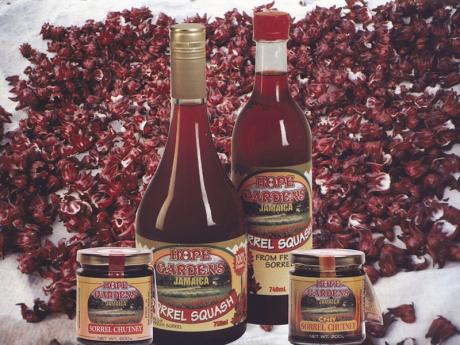 Products made from Jamaican sorrel.
1
2

... but only a small fraction of economic value harnessed

Jamaica as a brand is one of the most recognised globally. But while this has created opportunities that have the potential to generate substantial economic benefits for the island, it has also presented local authorities with a growing challenge - that of effectively monitoring and protecting the brand from exploitation by some in the global marketplace, which is resulting in Jamaica losing out on billions in potential earnings.

It is estimated that the island loses about US$20 billion of the economic value of Brand Jamaica annually. This economic value is said to be worth between US$33 billion and US$35 billion annually - based on a formula used by Interbrand to calculate brand value, on an annual basis. Interbrand, established in 1974, describes itself as being the world's leading brand consultancy, with a network of 33 offices in 27 countries. It is the publisher of the highly influential annual Best Global Brands ranking.

"Jamaica's brand value is two and half times its gross domestic product ... . That means there is US$20 billion we can't convert," social entrepreneur Dr Henley Morgan told The Gleaner in an earlier interview.

The Jamaica Promotions Agency (JAMPRO), the principal government agency responsible for promoting and safeguarding Jamaica's brand internationally, said the economic opportunities that continue to escape the country's grasp are something that it is concerned about, but can do very little to halt.

"This is a particularly vexing area of concern," JAMPRO told The Gleaner. The agency, in an emailed response to our questions, said the Government just does not have all the resources "necessary to police and monitor the presence of our brands in the international marketplace".

Consequently, JAMPRO said it has been encouraging local businesses to register their intellectual properties with the Jamaica Intellectual Property Office (JIPO) based in Kingston.

"Also, we ensure that several of our workshops do include sessions on intellectual property protection. Professional advice is also available by contacting the JAMPRO Contact Centre," it added.

Joan Webley, the manager of copyrights and related rights at JIPO, had explained previously to The Gleaner that the agency has been pursuing what is referred to as geographical indication (GI) registration to protect products made in Jamaica.

A GI is a name, or sign, used on certain products, which corresponds to a specific geographical location or origin. The use of a GI may act as certification that the product possesses certain qualities and is made according to traditional methods, or boasts a certain reputation, because of its geographical origin.

According to JAMPRO, "In markets throughout the world, Brand Jamaica products are highly favoured". It explained that "Brand Jamaica has managed to do this with the skill and performance of its people [and as such], globally, persons feel a positive affinity for Jamaica - which is the first step towards someone actually buying a product from Jamaica".

Because of the high favourability of Jamaican products in the international marketplace, JAMPRO said it has to consider seriously the island's ability to meet the demand for those genuine Jamaican products that are marketed to the world.

"Jamaica's limitation lies not in the realm of inability to market, but in our ability to satisfy the demand once realised," JAMPRO explained.

Meanwhile, Roselyn Fisher, general manager of the marketing and development arm of the Scientific Research Council (SRC), revealed that the agency is now busy in the formulation of products from nearly 100 different local medicinal herbs and weeds, including the guinea hen weed, which is revered for its anti-cancer properties.

The SRC - an agency of the Ministry of Science, Technology, Energy and Mining - has been spearheading the development of authentic and unique Jamaican foods, teas, beverages, cosmetics and other products. It also does food analysis, establishes plant profiles, as well as propagates and develops high-yielding plant varieties, including tissue culture for sweet potato, banana, and miniature roses, among others.

With lawmakers about to give the green light for the production of ganja for medicinal use, the SRC general manager told The Gleaner that it is working in partnership with several entities in developing a number of products from local ganja - another plant for which Jamaica is already renowned.

"One of the [products] that we are actively pushing right now is lemon grass. To that extent, we have brought to market lemon grass body wash and lotion, and persons have gone on to manufacture lemon grass drink, tea - different blends - and have exported them and are doing well," Fisher highlighted.

Another product that the SRC is currently pushing is sweet potato, for which formulations are being developed for chips, flour, and drink.

Additionally, "We have formulations for beverages, herbal teas, sauces, condiments, jams and jellies, minimally processed foods," she said, explaining further that "we also do new product development, not just for food, but also for personal care, and a lot of persons are now coming in for us to assist them with products for natural hair."