Industry board turns up heat on coffee criminals 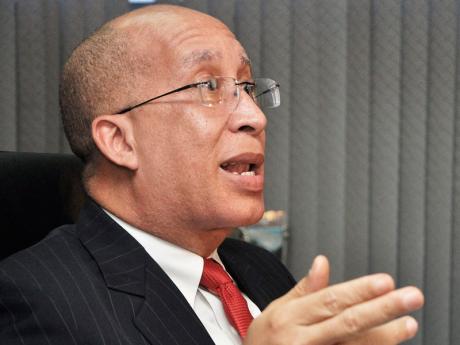 Delano Franklyn, chairman of the Coffee Industry Board, shows a package of unlicensed coffee while Orine Henry, director of the regulatory division of the Bureau of Standards Jamaica, looks on during a press conference on measures to safeguard Blue Mountain Coffee at the Coffee Industry Board's Kingston headquarters yesterday. - Jermaine Barnaby/Photographer

A multi-agency task force has been established to identify and prosecute cases of brand infringement relating to Jamaica Blue Mountain Coffee in Jamaica and overseas, as well as curb the illegal importation of coffee.

Delano Franklyn, chairman of the Coffee Industry Board (CIB), yesterday announced that the task force, comprising members of the Jamaica Constabulary Force, the Bureau of Standards Jamaica, Customs, the Jamaica Intellectual Property, and the CIB, will be going after criminals in a co-ordinated and targeted approach to stem the financial losses and other fallout from this illegal action.

This has become necessary in light of the growing incidence of persons in and outside of Jamaica who are selling regular coffee as Jamaica Blue Mountain Coffee to unsuspecting consumers. In addition to the fraud perpetuated, this practice, known as 'passing off', is also having a negative impact on the image of the Jamaica Blue Mountain Coffee as the poor-taste profile of the inferior-quality beans it being accepted as an accurate reflection of the genuine stuff.

In addition, there are persons who are trading in Blue Mountain Coffee, including importers, who are operating without the requisite licences, as required by law, according to the chairman of the CIB.

"It has also been brought to our attention that the Jamaica Blue Mountain Coffee trademark logo is being misused by a number of persons. The Coffee Industry Board will not sit idly and allow these breaches to continue, Franklyn said during a press conference at the CIB head office in Kingston.

While he could not put a dollar figure on the losses to fraud or the amount of illegal coffee being imported," Franklyn insisted that the regulatory agency would step up its efforts to protect the integrity of the premium brand.

This action comes at a time when coffee production is at an all-time low of 180,000 boxes, down from 500,000 boxes 10 years ago. In fact, earnings from coffee exports last year were US$11.7 million, less than the US$15 million earned the year before. Ravaged by the twin assault of berry borer infestation and leaf rust, the local coffee industry is going through one of its worst phases in recent years.