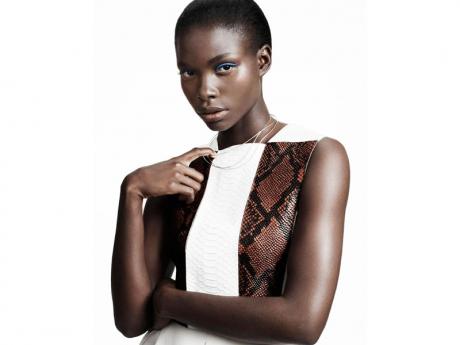 In doing so, Williams becomes the first model from the Caribbean to shoot a global cosmetics campaign for a major brand.

The graduate of Vere Technical High School in Clarendon will become the face of L'Oréal cosmetics worldwide, adding the commercial success of a major cosmetics campaign to the editorial success of her three Vogue covers.

While figures have not yet been made public, Pulse stated that the L'Oréal campaign is the single most important and financially valuable commercial campaign ever shot by a model from the Caribbean.

"Williams is the top Caribbean model and one of the world's leading supermodels," Pulse said in a statement.

Over the years, Williams has achieved milestone after milestone, but interestingly, after eight years in the international model industry, when most careers are at an end, or have at least started to wane, Jeneil's keeps growing."

Before leaving for Paris last Saturday, Williams said she was "very excited" to represent L'Oréal globally.

Pulse Chairman Kingsley Cooper, who took Williams to New York eight years ago and placed her with her current US booker, Steven Bermudez, then at New York Models, said he felt his charge still has a lot more to achieve.

"This uniquely beautiful, blue-black-skinned superstar is very special. She has her own look, as well as her own place in modelling history, as she is like no other model currently on the international circuit," Cooper told The Gleaner. "She still has a way to go."

Bermudez, now at IMG, the world's largest model agency, said: "This cosmetics campaign will give her a momentous relationship with one of the world's great brands."

Williams was honoured by Pulse in Jamaica last year with a series of receptions, dinners, special official visits, including a Jamaica House meeting with Prime Minister Portia Simpson Miller, radio and TV interviews, and a return to Vere. She was presented with awards and citations for her outstanding accomplishments in the field of international modelling.