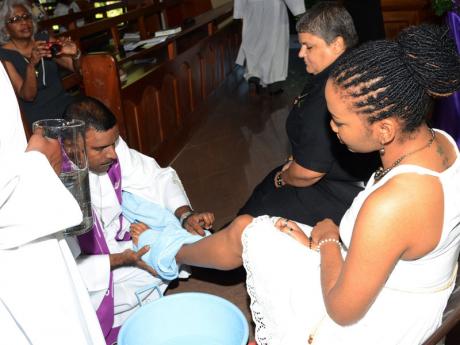 The Reverend Father Sean Major-Campbell washes the feet of two Jamaican lesbians, Jalna Broderick (in the background), director of Quality of Citizenship Jamaica, and Rochelle (surname withheld) during an observance in celebration of Human Rights at Christ Church in Vineyard Town, St Andrew, yesterday. - Photos by Rudolph Brown/Photographer

A decision by the Reverend Father Sean Major-Campbell to openly embrace and show love to members of the lesbian, gay and transgender community during yesterday's service at the Christ Church in Vineyard Town, Kingston, caught members of the congregation by surprise, with some telling The Gleaner afterwards that they felt betrayed by their spiritual leader.

In what is believed to be an unprecedented act within local church ministry, Major-Campbell washed the feet of two lesbians and subsequently allowed a testimonial from a transgender individual who expressed delight at the acceptance and inclusiveness shown by the church.

Like the women, he is a professional, and has struggled with identity issues, pointing out that this has made life difficult for him and members of his family, including his mother, who he said loves him no less.

Some members of the congregation are now accusing Major-Campbell of betraying them by promoting the theme 'In Celebration of Human Rights', in keeping with the liturgical season of advent, but embarking instead on preaching acceptance of the homosexual lifestyle.

They described his action as underhanded.

"I don't believe you should beat anybody or anything because of their sexual orientation. However, I just think the minister was disingenuous to us, as members, because he told us he was having a human-rights service and at no time did he mention that he would be having these lesbians and whatever, having their feet washed by him. I think the service was more gay rights than human rights ... ," another member said.

In the meantime, concerned but unfazed by the reaction of members of his congregation who took issue with the format and content of the service, Major-Campbell has appealed for greater understanding of human sexuality.

"It is quite
understandable that some persons will have some difficulty because
human sexuality is a difficult subject and, generally speaking, in our
country and culture, we really do not have enough safe spaces for people
to explore the subject, without feeling safe or judged, and that is
true even of the Church itself," he told The
Gleaner.

Some church members told
The Gleaner they were uncomfortable with how the
day's activities had unfolded.

"It was based on the
whole sexual orientation and gay rights and I had a problem and many
other members had a problem with that. The parson them always run things
and can do whatever them want, but out of respect for your
congregation, if you gonna do something like that, which is new, you
should have had the respect to say it, so people can voice their
opinions," a perturbed member shared.

However, describing it as a subject that
"we need to visit", the priest said that for too long the Church has
gone through the motions, talking about things such as love and kindness
but not delivering when faced with the harsh realities of those
demands.

He explained: "The truth is the call to love
is not just about your close friends and close family and those it is
easy to love; the call transcends those we are not so comfortable with,
as well."

In his sermon, Major-Campbell, a regular
letter writer to The Gleaner on rights and sexuality,
and who has been critical of churches, urged congregants to move beyond
praying and talking about justice to becoming active agents in the
promotion of human rights.

This was welcomed by the
transgender man, identified as FJ, who testified that this was his first
visit to a church in a very long time "because it wasn't a very safe
place for me anymore".

He admitted to feeling very
touched by the reception at the church.

Meanwhile,
Rochelle (surname withheld), one of the lesbians who attended the
service, told The Gleaner she had some concerns about
personal safety now that she has gone public.

The
love and support of family and friends would continue, she said, but the
fear of being targeted by others was very
real.

International Human Rights Day is observed on
December 10 each year and seeks to bring to the attention 'of the
peoples of the world' the Universal Declaration of Human Rights as the
common standard of achievement for all peoples and all
nations.

This year's slogan, Human Rights 365,
encompasses the idea that every day is Human Rights Day, and celebrates
the fundamental proposition in the Universal Declaration that each
person, everywhere, at all times is entitled to the full range of human
rights; that human rights belong equally to all individuals; and bind
persons together as a global community with the same ideals and
values.