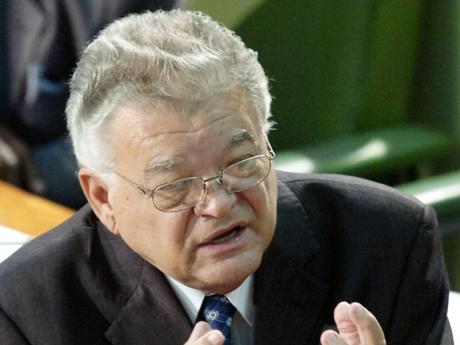 Admitting that he has been involved in what could be viewed as a series of exchanges with leader of the Jamaica Labour Party (JLP) Andrew Holness, veteran politician Karl Samuda yesterday poured scorn on allegations by other party members that he was going after his one-time ally.

Samuda, a former general secretary and treasurer of the JLP, also served notice that he would be engaging the JLP leadership once again at yesterday evening's meeting about failings and flaws threatening to hamper the party's chances of success at upcoming polls.

"I am not taking any leader to task," said Samuda. "I will be among others who will be speaking to the issues that confront the party."

The man who ushered the JLP to a rare general election victory in 2007, the first since 1989, told The Gleaner that he did not believe all's well in the JLP.

Samuda is not convinced that despite positive showings in recent opinion polls, his party is ready to take on the ruling People's National Party (PNP).

"We are not politically or sufficiently ready," said Samuda. "A lot of work to be done and little time to accomplish it, and we have no time to waste if we are serious about forming the Government, it is as simple as that."

Insiders who supported Samuda contended that the JLP is at a low at a time when it should be on a high, as the PNP has failed miserably.

They suggested that the JLP should be in tip-top shape but the problem is that not enough is being done to unite the party, more than a year after the leadership challenge. Detractors said the matter is made worse as the party has not put in any kind of serious organisational and fund-raising work and remains silent on issues.

Holness is accused of not being willing to take advice, a situation that has put a blunt on election readiness as many organisers, vocal leaders, people who can raise money, and other prominent people who sided with Audley Shaw against him in the leadership challenge last year, feel alienated. Samuda warned that if things continued in this vein, the JLP could not be assured of victory in any poll - be it by parish council or general election.

"I am a frank and outspoken person, and if that is interpreted as being involved in a plot against the leader, that is most unfortunate," he said.

Added Samuda: "I don't wish to be singled out as a conspirator or antagonist, for I am just a frank, open and straight-talking Labourite who wants the party to be in a fighting, fit shape to confront the PNP at all levels."

As the internal strife intensifies with another meeting late yesterday, Samuda warned that he would continue to speak out against what he perceives to be problems within the organisation.

"But I have no plan, intention or engaged in any conspiracy to derail the leader," he said.

Speaking with The Gleaner ahead of the fifth no-holds-barred face-off involving the members of parliament on the Opposition benches, Samuda, one of the prominent allies of Holness in the leadership election against challenger Shaw, has always figured prominently in the talks.

"I am seeking something for the benefit of the country and the party," said Samuda. "So if I see something not working, I am going to call it out, but I am not engaged in any plot to unseat the leader."

Added Samuda: "I am as concerned as any good labourite would be that the party needs to get into shape to contest an election."