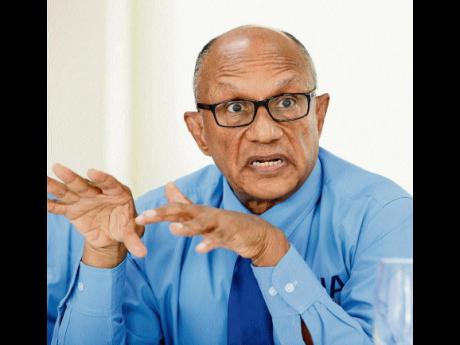 Professor Trevor Munroe, the radical political warrior, who fought long and hard for the advancement of communism in the ideologically-divided period of the 1970s, and who has placed himself, these days, at the vanguard of the battle against rampant corruption in Jamaica, was yesterday forced to confront the ghost of his past.

"Like all of us, we have our limitations and our faults notwithstanding, our job is to get better done," conceded Munroe in his defence.

He was being taken to task on his role as the founding executive director of the National Integrity Action (NIA), established to wage war on perceived rampant corruption bedevilling Jamaica.

"I am not pure and I am not an angel," asserted the former leader of the now defunct communist organisation called the Workers Party of Jamaica (WPJ).

The once uncompromising communist who took a hard-lined stance in the past, has attracted a strong ally in public commentator and NIA director, Martin Henry.

"If we are going to be progressive, at some stage, we will have to agree to collaborate around larger interests and future directions rather than simply review elements of the past, which we may not have liked or have participated in," said Henry.

"This is absolutely crucial at both the political as well as the civil-society level," he stressed.

Addressing a Gleaner Editors' Forum yesterday, in acknowledgement of "Anti-corruption Day," commemorated worldwide on Tuesday, Munroe sought to shed light on his motivation atop the organisation that has jumped prominently under the public glare in recent years.

"One thing (that) is true is that I was a
communist, and two, I am not pure," said the noted academic at the
region's premier tertiary institution - the University of the West
Indies (UWI), Mona Campus.

"We are not trying to be
self-righteous or king makers, but citizens who are exercising their
rights, and we are not above reproach."

He was responding to public commentator, Dr Paul
Ashley's suggestion, that the party that the communist activist led, is
alleged to have played a role in the 1983 bloody coup of former
Grenadian Prime Minister, Maurice Bishop's New Jewel
Movement.

The coup led to the Grenada invasion by an
army coalition from the region and the United
States.

Asked by Ashley: "Are you not setting yourself
up as a super pressure group, to order private sector or government,
opposition or any civil society or other organisation what to do? Who
appointed you king and who are you accountable to, on behalf of the
Jamaican people?"

Said Munroe: "Civil society
organisations and non-governmental bodies like the NIA, reflect public
concerns ... . We don't pretend to represent people in the way that a
politically elected person does."

However, he argued
that in reflecting public concerns, the NIA has an obligation to take up
the responsibility to becoming members. "We not only reflect the
citizenry but make it become more
representative."