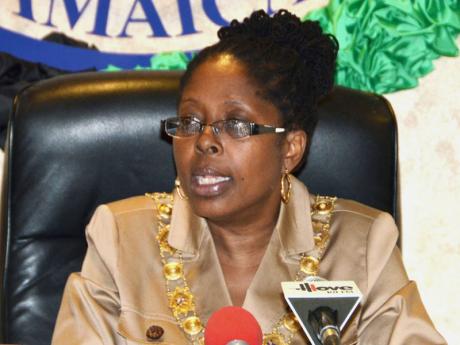 THE KINGSTON and St Andrew Corporation (KSAC) is reporting that 95 per cent of development applications submitted to the council for November have been approved.

These have been processed within the stipulated 90 working days, as the corporation continues its work to improve the turnaround time for development approvals.

This was disclosed by Kingston's Mayor Angela Brown Burke, while addressing the KSAC's monthly meeting at the council's chambers in downtown Kingston on Tuesday.

Brown Burke noted that 27 applications remained in the system for more than 90 days, largely due to outstanding comments and inputs from external agencies.

"The majority of these outstanding applications are awaiting those comments. It continues to be something that we are concerned about and we are working with external agencies to improve (this)," she said.

The mayor noted that while the KSAC continues to be plagued by issues relating to Information and Communications Technology, "which is retarding some of what we do," the council has been able to make significant advances in the approval process.

She said that "95 per cent within 90 days is certainly a good place to be, although we are aiming for 100 per cent."

Speaking at the KSAC's first town hall meeting for 2014, in February, acting director of planning at the KSAC, Shawn Martin, had pointed out that previously, development applications were subjected to lengthy waiting periods for approval, due to bureaucracy and the quality of some designs.

"But, we are moving forward...there is evidence of the tremendous work that is happening now, with regards to development approval. We have had record numbers of approvals, and that trend has continued. We and our partners have been meeting and consulting with other stakeholders in the development industry, with a view to serving you better," he said.