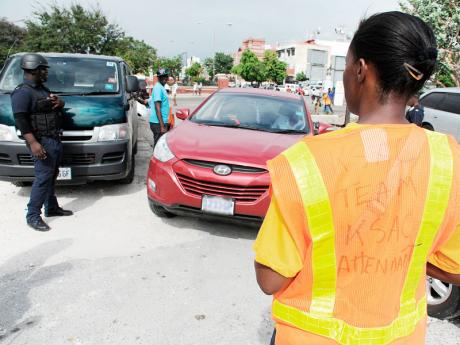 A Kingston and St Andrew Corporation (KSAC) employee looks on as policemen direct motor vehicles during an initiative by the Kingston Central police to reduce extortion in the area. The police, in collaboration with the KSAC, have taken over the full operation of the Wolmer's Arcade car park.-Ricardo Makyn/Staff Photographer

In a move to smash what law-enforcement officers are describing as a major extortion ring, involving at least three major gangs that have been making a killing in the busy downtown commercial district, the Kingston Central Police Division has seized control of two hot spots in the area.

With the pace of operations in the shipping district stepping up as the climax of the festive season approaches, senior police officers yesterday shepherded their teams through the crowded area.

They were closely manning the former extortion haven located beside the Church Street-based Wolmer's Arcade and the historic Kingston Parish Church, South Parade.

"This will put a big dent in the operations of the extortionists," said commanding officer of the Central Police Division, Superintendent Michael Scott.

He told The Gleaner the decision to take over the premises, owned by the Kingston and St Andrew Corporation (KSAC), was influenced by rampant gang feuds in recent times.

Scott told The Gleaner that three major area gangs have been fighting for control of the extortion zone.

But yesterday, instead of the extortionists, team members bedecked in KSAC-marked vests collected fees from motorists who used the car park.

Scott said displaced gangs are from Tel Aviv in Central; Johns Lane and the Bartley Building in downtown.

"Their members were the ones featured in the feuds," said Scott. "On a given day, before the KSAC took it over, the extortionists demanded fees from motorists."

He told The Gleaner that efforts by the warring factions to ward off the feuds by allocating the area for each gang to receive a bite of the extortion proceeds did not always work, as some members frequently breached the arrangements by encroaching on the area.

"This resulted in the stabbing of one man and the shooting up of areas," said Scott. "It was for this reason that they went to the KSAC to outline their plans to wrest control from the hoodlums."

Scott told The Gleaner that, based on what he observed in the aftermath of last Friday's takeover, the illegal venture was quite lucrative in the past for the extortionists.

"The KSAC was able to rake in thousands in just one day," he said. "That tells you something of the gang's income on a daily basis."

He said that after the warring factions began to explode, the Central Police Division initiated a strategy that it presented to the KSAC to take over the property.

Deputy superintendent in charge of operations, Earl Jagon, told The Gleaner that after cleaning up the North Parade taxi stand in the vicinity of the Ward Theatre, the police turned their attention to South Parade.

"We started on Friday and we are targeting extortionists in the Kingston Metropolitan Region (KMR)," he said.

Asked about sustainability given the spate of short-lived operations in downtown Kingston by the police, Scott said this is just a start.

"The spate of intimidation to which motorists were subjected has come to an end."

As some motorists fussed over the $100-per-hour charge as well as the absence of parking guides, Scott told The Gleaner that the police were in the process of drafting a plan to assist the KSAC.

He said the police have given the KSAC its undertaking to always be in the area.

"It's a teething process," he said, "but things have been proceeding relatively smoothly."