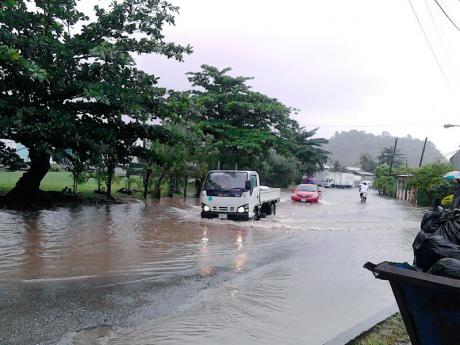 An inundated roadway near Long Wall at Boundbrook.-Photo by Gareth Davis 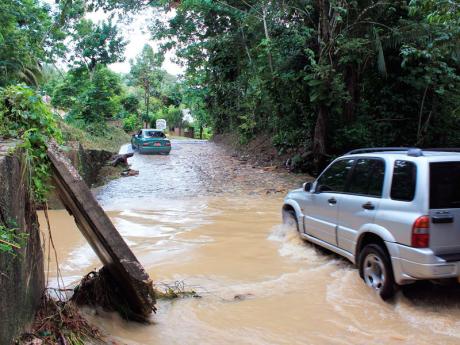 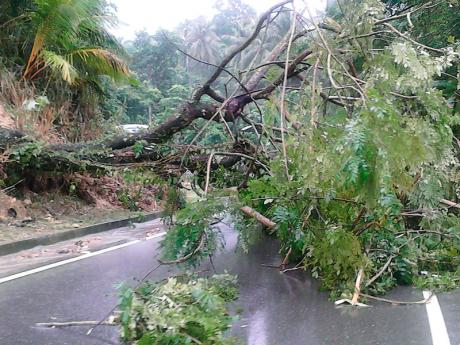 A fallen tree in Black Hill, Portland, that brought vehicular traffic to a halt for more than two hours during heavy rain.-Photo by Gareth Davis
1
2
3

PORT ANTONIO, Portland:Road-maintenance crews and other officials were kept busy for the most part of yesterday after heavy rains in Portland resulted in several blockages caused by land slippages and fallen trees in Black Hill.

Workmen assigned to the National Works Agency (NWA), along with private persons employed by West Portland Member of Parliament Daryl Vaz, managed to partly clear more than 12 landslides from White Gate leading up to Browns Town in Black Hill, after getting some relief following more than four days of heavy rainfall.

Said Vaz: "As usual, West Portland is the worst affected as it relates to the two constituencies. This roadway was impassable on Friday of last week, and following that, approximately 16 hours of torrential rain has again reaped havoc on not only motorists, who were stranded for several hours, but also residents. Rain is still in the forecast and conditions could very well worsen over the next two to three days."

The workers also managed to remove a huge tree that reportedly fell shortly after 8 p.m. Sunday, rendering that thoroughfare impassable to large vehicles, including buses, trucks, trailers and heavy-duty equipment.

And after being forced to cope with the inclement weather, the work crew was able to cut away at the trunk of a massive tree, thus allowing access to single-lane traffic.

But while the rain pounded sections of Hope Bay, Black Hill, and Orange Bay at the western end of the parish, the town of Port Antonio also got its fair share of persistent showers, which left several roadways inundated.

Long Wall, near Bryan's Bay in the vicinity of Coronation Bakery and Port Antonio High School, was left inundated for more than six hours, making that stretch of road impassable to small vehicles.

Mayor of Port Antonio Benny White told The Gleaner yesterday that a drain in that area was blocked, resulting in approximately 800 metres of roadway being flooded.

"The continuous practice of dumping garbage in that drain is now affecting us," commented White.

He continued: "Residents and even students continue to indulge in the dumping of plastic bottles, foam boxes, scandal bags, box juices, and other kinds of material in that particular drain, causing it to be blocked.

"We have made every effort to sensitise them about disposing of their garbage in bins and other receptacles, but they have failed to adhere. Sad to say, but now they are affected, and unless they learn the hard way, they might never see the need to change such practice."

In the meantime, heavy rain in St Mary caused flooding to areas in an around the parish capital, Port Maria, and compelled the local council to hold an emergency meeting to discuss contingency plans if the downpour continues.

Elsewhere in the parish, there were reports of flooding in Kiddland, Bailey's Vale and Tryall, where a deluge caused a hazard for drivers.