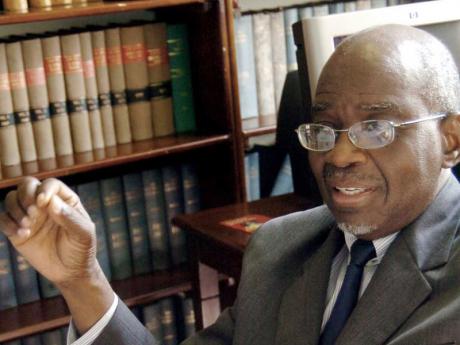 THE INTEGRITY Commission, the body set up to police the annual statutory declarations of politicians to ensure they conform to the provisions in the (Parliament) Integrity of Members Act, yesterday revealed it investigated a gift of $500,000 given to a parliamentarian last year.

Justice Paul Harrison, chairman of the Integrity Commission, in a submission to a joint select committee examining the 2014 Integrity Commission Act, said the new statute should include a provision that prohibits parliamentarians from soliciting or accepting gifts.

"We believe that the bill should specifically prohibit the receipt of gifts by a parliamentarian or public officials," declared Harrison, adding that these gifts should be classified as "presumptively unlawful".

Harrison, who did not disclose the name of the parliamentarian who was investigated for the $500,000 gift, said the commission asked for verification and received an affidavit from someone who acknowledged providing the gift.

"It may well have been received with some degree of scepticism, but the fact is we asked about it and the person verified it," Harrison said.

"We are just saying that it can create a danger if it is not addressed, and I think it should be addressed."

The head of the Integrity Commission argued that the Staff Orders of the public service provide that officers in their official capacity are forbidden to solicit or accept gifts or gratuities for the performance or neglect of official duties and responsibilities.

He noted that a parliamentarian was not regarded as being in the public service as stated in Section 1 (6) of the Constitution of Jamaica.

"There is an anomaly here. There is no reason why public officers should be under this restriction and politicians are not," Harrison reasoned.

During yesterday's deliberations in Gordon House, some members of the committee expressed reservations about the proposal.

Opposition MP Derrick Smith, who has been in representational politics since 1983, cautioned against accepting Harrison's recommendation.

According to Smith, for a practising MP to conform strictly to Harrison's proposal was "quite a challenge".

"For those of us who have to be on the road on a regular basis and deal with daily situations and friends can over time assist by covering the cost of support staff, it's just not practical to walk away from that type of assistance if you want to manage a constituency in an appropriate way," Smith argued.

Government Senator K.D. Knight argued that such a provision in the proposed law would be difficult to monitor and that the Government should look to the Corruption Prevention Act to remedy the situation.