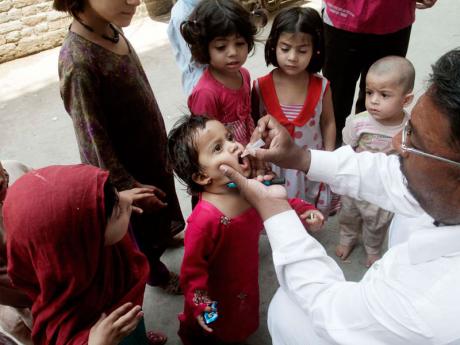 A Pakistani health worker gives an oral polio vaccine to a child in Lahore, Pakistan. - AP 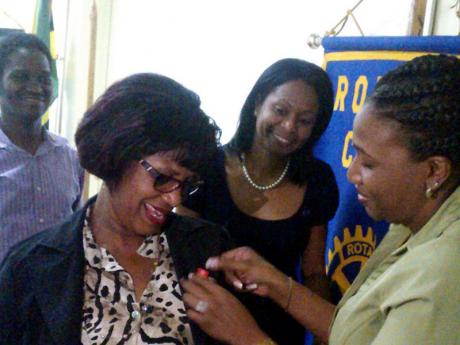 Genett Rhone, polio survivor and Special Olympian, is pinned by Dr Suzanne Fowles with an 'End Polio Now' badge following her presentation at a meeting of the Rotary Club of Trafalgar New Heights at the Jamaica Employers' Federation recently. Looking on is Trafalgar New Heights executive, Kerry Spencer. - Contributed
1
2

Jamaica recently experienced an outbreak of the chikungunya disease, a debilitating virus which causes severe joint pains in its victims, lasting usually only for a few days. But in the 1950s the country battled an even more severe outbreak of another disease, which was more deadly, claiming the lives of many Jamaicans, especially children.

It's a part of Jamaican history which is not often recalled, two outbreaks of poliomyelitis in 1954 and again 1957 and mild cases in the 1980s, mostly in St James, which spared no one, irrespective of gender, race and class.

"The outbreak in the 1950s was severe. It impacted people right across the island," said Genett Rhone, polio survivor, at a recent presentation to the Rotary Club of Trafalgar New Heights as the Corporate Area-based service club observed Polio Eradication Day. The disease is 99 per cent eradicated worldwide, due in large part to the work of Rotary International, but still affects two countries in the world, namely, Pakistan and Afghanistan.

It wasn't like chik-V. No one would proudly admit that they had a relative with the disease because there was a fear of being discriminated against, and when it was found out, those families and the children especially were isolated.

"For most children around the island it was very difficult to access treatment because they didn't know what it was; vaccines were not available. It was new to the island and there were no symptoms," said Rhone, a Special Olympian.

It's not certain how the disease got here, but it first showed up in England and later it impacted mostly residents from communities in and around the sugar belt across Jamaica, such as Bog Walk in St Catherine, where Rhone grew up and where there were many rivers and springs.

Adults who had the nerve-attacking disease rarely survived, she recalled. "The virus tends to attack your limbs ... the legs and the arms," explained Rhone, as she noted that the virus retards muscle growth.

"It killed many adults," she explained, "because the virus often attacked the upper body in grown-ups, making it difficult for them to breathe, and with no or non-advanced breathing medical apparatus in the 1950s, the chances of survival were low."

According to Rhone, the only piece of equipment available at the time was a cylindrical machine called the 'iron lung', which was next to a death sentence. The body was immersed in the equipment, which would breathe for the victim. However, removal from the iron lung would mean certain death, and only the wealthy could afford it.

Rhone is one of 70 polio survivors in Jamaica. The Special Olympian represents one of the mild cases of the disease although she has had it since three years old. Most are too shy to face the public because of their severe incapacitation or their many years of isolation from the public by their families and communities.

They face many challenges - a major one of those being the issue of treatment because few modern doctors understand the disease, which was eradicated in Jamaica some 30 years ago. Not much work has been done since Rotarian Samuel Cohen Ricketts and Professor Sir John Golding's intervention during those early years.

The syndromes manifest in many ways and vary with the individual. They range from memory loss, experiences of chilliness and extreme pain to insomnia. And with few medical experts to understand it, the group meets each year at the Sir John Golding Rehabilitation Centre in St Andrew to talk about their own problems and exchange thoughts on how to treat it.

"Each year that we meet someone dies and it's a reality that we don't want to face, but it has happened every year," said Rhone.

"Polio is a difficult sell because many of the victims are now almost invisible in the population. Only a few of us are in the working world and most persons are at home," she disclosed.