Where has Jonkanoo gone? Traditional masquerade on steady decline 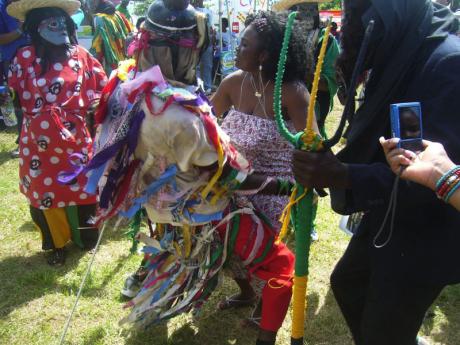 A patron dances with a member of the Port Maria John Canoe Group during the 2012 staging of the Portland Jerk Festival. - Photo by Paul H. Williams 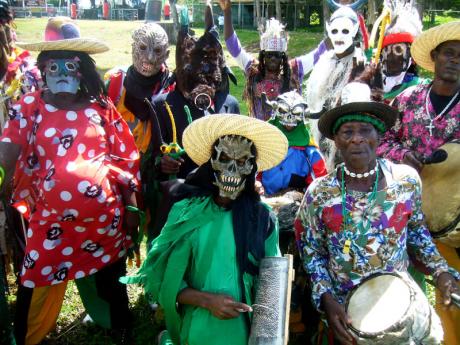 ONE OF the more exciting features of grand-markets/Christmas Eve festivities of yesteryear was the sight of screaming children, and some adults, as they ran and hid from their pursuers, masked men and women. "Jonkanoo a come!" Some people would shout.

Accompanied by 'Jonkanoo music', the masquerades danced and jigged seeking out their next 'prey'. And as much as these masquerades would drive fear into the hearts of some onlookers and scare the moonlight out of others, Jonkanoo masquerades were always much anticipated on Christmas Eve. Yet, as time went on, Jonkanoo has been retreating to its glorious past, to the days of slavery on plantations.

Life on the plantations for enslaved African was brutal and desperate. It was about working and living in sub-human conditions. In the process of producing sugar and other goods for European plantation owners, much blood, sweat and tears were shed. Yet, there were times when the overworked Africans got a respite of sort.

Christian festivals, such as Easter and Christmas, and holidays, such as New Year and 'saints' days, were the times when they were given breaks. But of them all, Christmas was the time when they revelled with wild abandon. It was a time of much festivity, food and drinks and the wearing of elaborate costumes.

In their finery, they split into tribal or other groups, parading through the towns and properties singing, dancing and playing music. The older slaves, dressed in European-styled clothes, would visit the masters' house and entertain them with their own music. In return, they would get food and drink.

The high points of the festivities were when they formed groups, distinguished by different coloured clothes, marched to and converged at certain spots, where they revelled all night, and day sometimes. The most striking of the revellers were the masquerades some of whom would dress up in European-influenced costumes. As time went on,the parade was led by John Canoe or Jonkanoo, the most flamboyant of the masquerades.

His purpose was to ridicule, awe and scare spectators. He would wear extravagant costumes as he led a parade of dancers and singers. The costumes were sometimes bizarre, but always colourful. On his head, there would be a huge hat or a miniature pasteboard house.

A popular Jonkanoo was Koo Koo or Actor Boy. He was a black man dressed in outrageous women's clothes and wigs, hiding behind a mask of a white woman's face. Isaac Mendes Belisario, an acclaimed 19th-century Jamaican artist, was a popular painter of Jonkanoo characters. His sketches are collectors' items. But who was Jonkanoo?

The research has revealed that "scholars identify West Africa as the source of Jonkanoo". In Belisario: Sketches of Character by Jackie Ranston (2008), Jonkanoo or John Canoe, is said to be a derivative of Jon Konny, a Ghanaian warrior chief. He fought Dutch colonisers for more than 20 years, defending his native Prince's Town.

In an article called 'The other Belisario - Another John Canoe', published in Jamaica Journal Vol. 32 Nos. 1-2, August 2009, Petrine Archer writes, "Around 1720, Jon Konny was eventually captured by the Dutch and sent as a slave to Jamaica, where he became a folk legend and the subject of slave street performances that bear striking resemblance to rituals practised Prince Town, even today." So Jon Konny's flamboyance became the benchmark, an masquerade leaders were thus called Jon Konny, and subsequently the parade itself.

Over time, the themes of the costumes, which had strong European elements, evolved to be more Afro-centric. The changes continued in the last half of the 20th century, and characters, such as the 'horse head', 'belly woman', 'pitchy-patchy', 'the devil', and some fictional ones, were added to the cast of masquerades.

But, it is not only the costumes that have changed. The popularity and the frequency of the masquerades have been on a steady decline since Emancipation. They had started out as an outlet to relieve the tension, pain and suffering of slavery people, but slavery was now abolished. There was no longer an anticipated period of 'freedom' and feasting, as opposed to the grind of slavery.

After it was no longer serving that purpose, and with the Christianisation of many ex-slaves, Jonkanoo began to lose its importance and significance. Also, over the years new types of entertainment and festivities have hastened the demise of Jonkanoo as it were. And as it stands, there is no significant effort to revive the art form, and to support the few remaining groups, which cannot go around performing for free.

Some time ago, The Gleaner spoke with Clifford 'Calypso Jack' Walters, leader of the Port Maria Jonkanoo group. He was very unhappy with the lack of support that Jonkanoo groups get. "The minister of culture should take up more interest and cooperate with the JCDC. For 50 years, I am promoting the Port Maria Jonkonnu Group ... keeping up the culture, and up to now ... we nuh get no help ... to go around Jamaica and spread the culture," Calypso Jack told The Gleaner.

When consulted this week about the seemingly disappearance of Jonkanoo, Bernard Jankee, director, African Caribbean Institute of Jamaica/Jamaica Memory Bank, said, "I do not think that Jonkunnu is disappearing as a cultural retention. It certainly is not as evident as it used to be, but this could be because there are now many more avenues of entertainment at Christmastime than was the case in earlier periods. It certainly has not disappeared, however, as there are still a few groups that do come out to perform in the Christmas season."