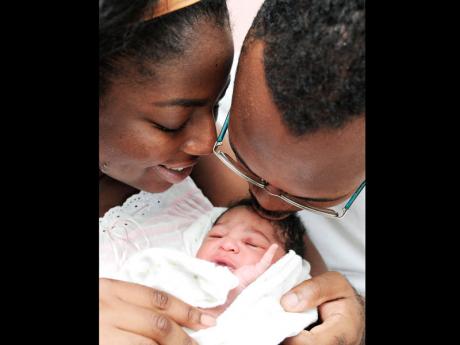 Shawnalee Gentles and her husband, Rowman Gentles, kiss the forehead of Genesis-Amani Gentles, who was born at 1:07 a.m., weighing 2.98 kg, one of two babies born at the Victoria Jubilee Hospital 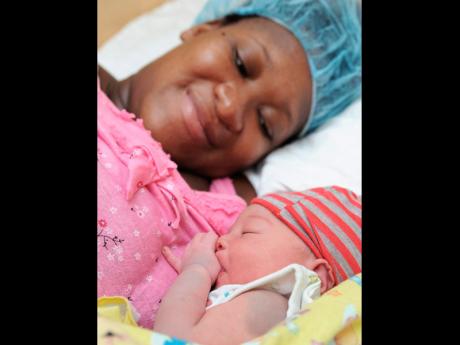 Sasha Williams looks at her daughter, Sashanique Jahmelia Polak, who was born at 1:07 a.m. on New Years Day, weighing 3.1 kg at the Victoria Jubilee Hospital. 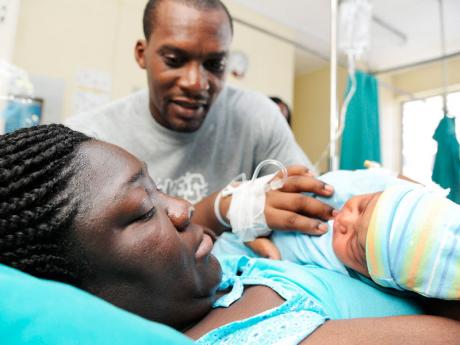 Prince Moodie enjoys the sight of his wife, Debiesha Bennett Moodie, and child Ajani Moodie, who was born at 12:30 a.m. on New Years Day at the University Hospital of the West Indies, weighing 3.52 kilograms. -photos by Ricardo Makyn/Staff Photographer
1
2
3

Prince Moodie has wanted a child ever since he and his wife, Debiesha, got married in 2010.After hours of labour, Ajani Moodie was born on New Years Day at 12:30 a.m. at the University Hospital of the West Indies (UHWI), weighing in at 3.5 kilograms.

Ajani was the first child born at the UHWI for 2015.At first, it was looking like he would be born on December 27, the elated father said. But I said to my wife, it will be December 31 our four-year anniversary. Who would have thought that the baby would hold out until January 1?

Describing events leading up to the birth of their first child, Debiesha was thankful that there were no complications during her pregnancy.

Throughout the nine months, there were no major incidents. My husband wanted a boy; we got a boy. I couldnt have asked for more.
The staff [at UHWI] is wonderful very caring and I must thank God that I was so well taken care of.

At the Victoria Jubilee Hospital in Kingston, other New Year babies vied to be the first. This year, however, there was no clear winner, as two babies, separated only by a floor, were delivered at exactly the same time 1:07 a.m.

Carefully wrapped in clothing fit for newborns, baby girls Genesis-Amani Gentles and Sashanique Polack were the centre of attention as relatives and hospital officials listened attentively as the parents spoke of their experiences.

First-time mother and newlywed Shawnalee King-Gentles never stopped smiling as she was keen to clarify her name choice in her now aptly named firstborn.

Incidentally, she never expected Genesis to be born on January 1, but rather chose the name purely because it was their first child.

Admitting to being exhausted, Shawnalee never relented as she explained her experience delivering her first child.

It has been 13 hours of labour; she didnt want to come out. But the staff was patient with me.
The staff here treated me very well, Shawnalee said.

Genesis father, Rowman Gentles, could not hide his joy while explaining his journey and holding his newborn.

As you can see, I am very, very happy. The journey has been great, he said.

Shawnalee has had a good pregnancy. And I made sure to have bonded with Genesis a lot. I spoke to her before she was born, and now that I can see her face, I am happy that she looks like her mother.
Every time I look at Genesis, I see her mother.

Though Shasha Williams, mother of Sashanique, had been in a maternity ward in the past, she was never the centre of attention until today.

Still recovering from her Caesarean section with her newborn asleep by her side, Williams expressed gratitude to the staff at the Victoria Jubilee Hospital and was happy that her child was born on New Years Day.

Genesis and Sashanique weighed 2.9 and 3.1 kilograms, respectively, and by all accounts, are both very healthy.

For being the first child born in 2015 at UHWI, Lasco presented Ajanis parents with an appropriately stuffed gift basket.

At the Victoria Jubilee Hospital, Health Minister Dr Fenton Ferguson handed over baskets to the parents of Genesis and Sashanique.