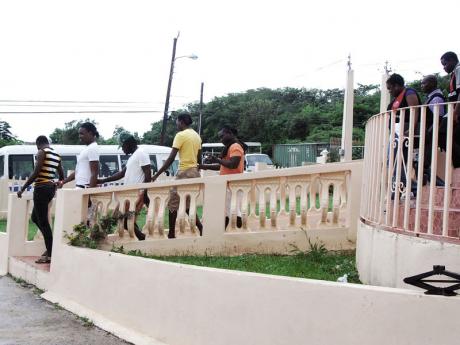 A TEAM from the Major Organised Crime and Anti-Corruption Task Force (MOCA) was stunned yesterday after a 10-year-old girl was found with items used in lotto-scamming activities.

Sergeant Kevin Wilson of MOCA said the police during an operation in western Jamaica yesterday held a child, who was sent from premises being investigated, with a knapsack containing items used for lotto scamming.

He said that this was a clever attempt to remove the illegal items before the police moved in, but the lawmen acted decisively and recovered the tools of the lotto-scamming trade.

Sergeant Wilson lamented how youngsters were being drawn into or groomed for lottery scamming as a legitimate way of making an income. He said this was one of the challenges that MOCA had to deal with.

The child was later handed over to her parents.

During yesterday's operation in Rose Heights, St James, the police detained seven males and two females who were allegedly involved in lotto scamming.

According to Sergeant Wilson, three of the persons had been previously held in 2012 with similar items, but at that time, there was no legislation in place to charge them and they were subsequently released.

He said that from January 3-8, operations carried out in St James, Westmoreland and Trelawny netted 18 persons. These operations are complemented by personnel from the Police Financial Unit and the Mobile Reserve.