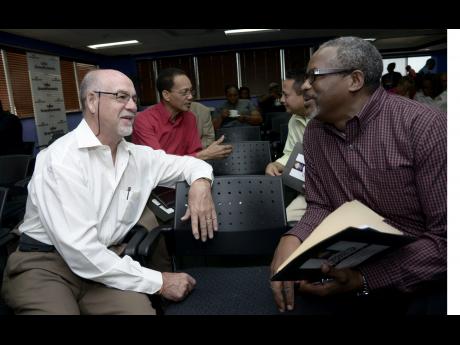 Power, who is on a five-day visit to the island, said he believes that Jamaicans are among the strongest people, and the country is the heart of the Caribbean.

He argued that Jamaica can move from ranking 85 out of 175 countries - scoring 38 out of 100 with zero being most corrupt - to somewhere within the top 10.

The Unashamedly Ethical movement has been in existence for about five years and Power's hope is to get as many Jamaicans as possible to join in.

Power said God called him to serve about 17 years ago, at a time when he, as a businessman, struggled with ethical issues, and in order to serve God, he had to do things the right way. That's where the movement was birthed.

"It came through a vision that God had given about three waves Ö ethics, values and clean living," said Power.

The 59-year-old spoke about the importance of ethics to business, saying many business leaders who are part of corruption fear being exposed and it is that very fear that will eventually expose them.

He said he believed that if it were not for God's calling on his life, he would have been a corrupt person today.

"I was doing everything I could do. I was there; I was influencing the politicians and decision makers to climb the ladder and I have found that none of those things gave me inner peace. Only when I invited Christ in my life [did] I find that inner peace," he explained.

Trevor Munroe, executive director of the National Integrity Action (NIA), said Power coming to Jamaica with this initiative was an excellent idea as the NIA commissioned a poll in November of last year that showed that 77 per cent of Jamaicans want a change.

"As the times have gone by, more and more of our people have shown that they want to get involved in combating corruption," said Munroe.

"Many should take the opportunity to be a part of that minority that will lead the charge to a change," he added.