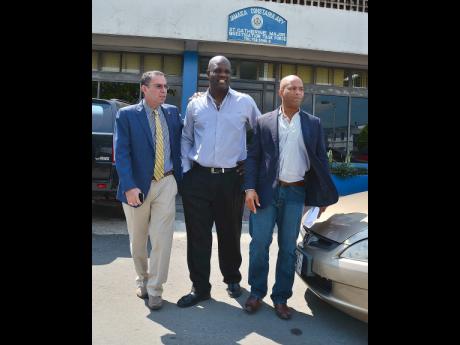 Lawyers representing the three Jamaica Labour Party (JLP) members named in the initial allegations about a $7-million plot to kill the party's leader Andrew Holness and general secretary, Dr Horace Chang, are demanding further investigations into claims that the scheme was hatched by two members of the party.

With the man who made the initial allegation now telling cops that he was used by members of the party who wanted to oust Daryl Vaz, James Robertson and Othneil Lawrence, lawyers for the three want the probe to continue to determine if there is any truth to his claim.

Attorney-at-law Peter Champagnie, who is watching proceedings on behalf of Vaz, told The Sunday Gleaner that he will be writing to Director of Public Prosecutions (DPP) Paula Llewellyn to seek advice from her office.

"I have been retained by Mr Vaz to watch the proceedings on his behalf, since his name has been tarnished by the allegations and his reputation as a public figure has been damaged," said Champagnie.

"I don't think the investigation is complete based on what has been presented. On examination of the files, I am of the view that further investigation must be done. So I will be writing to the DPP shortly, as well as the police, as I seek further clarification as I seek to represent my client," added Champagnie.

Watching the proceedings on behalf of Lawrence is attorney-at-law Hugh Wildman, who is adamant that further investigations must be done.

"If they really want to get to the bottom of the matter a good DPP would have entered a plea arrangement with this man, because it is clear he is not the mastermind," declared Wildman.

"So when the matter came to court last week, the court should have been told that the Crown will not proceed against the man, but he will instead become a witness for the State, as the matter is pursued further.

"The other option is that he should come to court, plead guilty and a statement taken from him in furtherance of the case and in pursuit of the real mastermind or masterminds," added Wildman.

Queen's Counsel K.D. Knight, who is watching the proceedings on behalf of Robertson, said his client is interested because "his name was mischievously called in a serious matter which he does not know anything about, and was not involved in any plot".

According to Knight, the entire statement from the ex-convict sounds incredible and maybe everything is false.

"If not, then certainly they (the masterminds) ought to be charged, because it is quite pernicious to involve him when nothing points to any involvement on his part."

Ex-convict Maxie Robinson, who had first reported the plot to kill Holness and Chang on January 29, changed his tune on February 10 and claimed that he had been recruited to make the report by two JLP functionaries whom he named in a confession statement given to investigators.

Robinson, who is now facing a charge of public mischief, has told the cops that he had gone to the JLP's Belmont Road headquarters seeking a job when he was recruited to the scheme with a promise of money and a motor car.