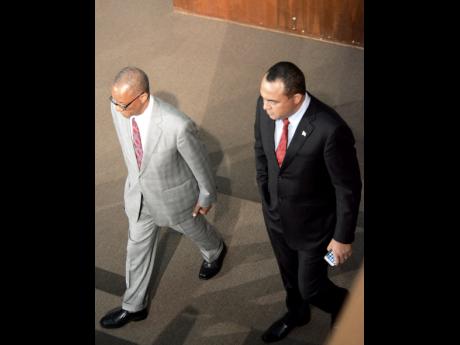 Leader of the Jamaica Labour Party (JLP) Andrew Holness has filed an appeal challenging the Constitutional Court's ruling that he gave himself power when he used undated, pre-signed resignation letters to remove two senators.

"I am confirming that a notice of appeal has been filed," attorney-at-law Georgia Gibson Henlin told The Gleaner yesterday. "It was filed by Henlin, Gibson, Henlin."

This latest legal manoeuvre came as a surprise and seemed to have caught even members of the JLP hierarchy off guard.

"I couldn't respond to that; I don't know about that; I am not aware of it," Sharon Hay-Webster, media liaison officer for the opposition leader, told The Gleaner.

"He has? I thought I heard Mr Chang say he wasn't going to be doing that," was the initial response of Wentworth Charles, the attorney representing Arthur Williams.

Charles said he had been advised that documents had been sent to his office but was not aware of the nature of the correspondence.

He continued: "It is the defendant's right if he so desires to appeal, and if he has, we certainly will be making an effort at the end of the day in relation to the upholding of the judgment in the matter, which we think is a sound judgment."

Williams and Dr Christopher Tufton were booted from the Senate in November 2013. Williams challenged his removal from the Senate, and the Constitutional Court granted declarations in his favour.

The court ruled on February 6 that the procurement of the letters and the resignation letters submitted to the governor general by Holness were inconsistent with the Constitution, contrary to public policy, and were null and void.

Two days after the court handed down its ruling, Holness, addressing a gathering at the Boulevard Baptist Church in St Andrew, apologised to Williams and Tufton.

He described the situation as a "regrettable embarrassment" and "unreservedly apologised" to both men.

Holness said then it was important for him to acknowledge his error if he had done something wrong and that he had a duty to apologise, saying that it was important that the nation be reassured that its leaders did what was morally right.

Since then, efforts had been under way to heal the rift within the party as calls continued to grow for the party leader to resign.

In an apparent about-turn, Holness is contending in several grounds of appeal filed in the Court of Appeal on Monday that the Constitutional Court comprising Justices Courtney Daye, Marva McDonald Bishop, and David Batts erred in facts and law.

Holness is arguing that the judges erred and wrongly exercised their discretion because in granting the declarations under Section 41 of the Constitution, the judges failed to consider "the effect of the refusal of the injunction sought by Williams and also the subsequent acceptance, by the governor general, of the resignations, rendering the seats vacant and, therefore, the appointment of the new senators".

It is being further contended in the appeal filed by Gibson Henlin that the judges erred in placing emphasis on whether Holness was appointed as Williams' agent to effect his resignation as distinct from whether by Williams' own act as well as the contents of the letters, Williams, by preparing and affixing his signature to the letters, he properly resigned and vacated his seat as a senator. No date has been set for the hearing into the appeal.

Williams and Tufton had returned to the Senate after the court ruling, but a resolution was passed for the court to make a determination on their status.

On Monday, the clerk to the Houses of Parliament, Heather Cooke, filed an application in the Supreme Court asking for a determination as to whether Williams and Tufton were still senators. If the court finds that they are not, Cooke is asking that it pronounce on the status of businessman Dr Nigel Clarke and Jamaica College principal Ruel Reid, who were appointed in place of Williams and Tufton.

The application is set for hearing on March 3 and an application will be made to join Holness as a party to the proceedings.