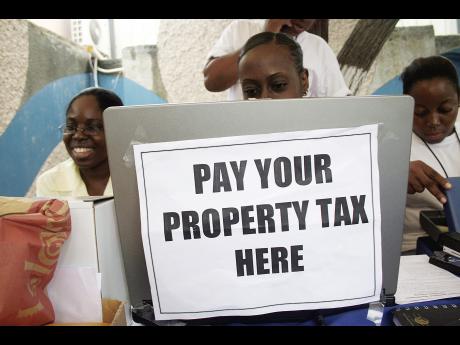 It will soon take just a few years of delinquency in the payment of property taxes to cause landowners to lose their property if legislation tabled in Parliament yesterday is approved.

The legislation, tabled in the House of Representatives, gives the authorities the power to sell the property of landowners who have failed to pay their property taxes for three consecutive years.

An Act to Amend the Tax Collection Act is intended to enhance the compliance and enforcement capabilities of the local authorities and Tax Administration Jamaica.

A critical component of the proposed new law is a provision for the remission of property tax, at the discretion of the minister, in the case of persons over the age of 65 years, pensioners, and disabled persons.

According to the bill, the minister may direct the commissioner general not to levy any property tax and to remit such tax, either in whole or part, to a person who is "poor or destitute" and is unable to pay either current property tax or arrears due to be paid by that person.

At the same time, the bill gives the commissioner general the power to apply to the Supreme Court for an order of sale in respect of any land in which an amount due and payable under the Property Tax Act is in arrears for at least three consecutive financial years.

This would be a step more than laws which now allow the State to haul delinquent property owners before the court.

Currently, Section 7 (4) of the Property Tax Act states that "without prejudice to any other means of recovery, the property tax and any penalty and interest payable pursuant to this section, may, subject to rules of court, be sued for and recovered in the Revenue Court or in a Resident Magistrate's Court by a Collector of Taxes, with full costs of suit, from the person charged therewith as a debt due to the Government".

As part of the proposed procedure for sale of a landowner's property, the tax authorities would be required to notify the delinquent taxpayer of the arrears.

Before applying to the court to start proceedings for the sale of the delinquent landowner's property, the commissioner general would have to "cause a notice of intention" to sell the land to be published in a "conspicuous location on the property in question".

The notice would also be published in a daily newspaper in circulation throughout Jamaica on at least two occasions but two weeks apart.

The last publication should not be less than one month before the date the commissioner general applied to the court.

Where an order for the sale of the land is made, the legislation sets out rules to be followed. The sale of the land shall be by public auction at a time and manner as prescribed by the court. In addition, any person would be allowed to bid for the land.

According to the proposed statute, if the land remains unsold after three attempts at sale, the commissioner general shall make reasonable efforts to sell the land by private treaty and "shall owe a duty of care akin to that owed by a mortgagee selling under a power of sale".

Under the latter, the amendments include provision for the adjustment of land valuations based on a method of indexation and expansion of the methods and hours for the service of documents under the act.