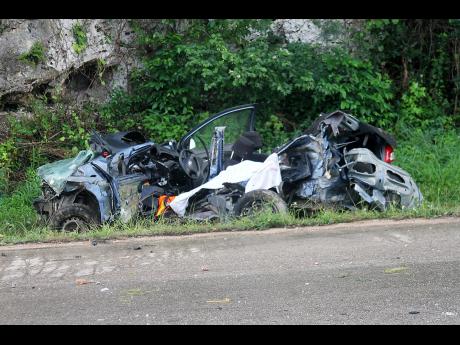 Richard Morais
The mangled wreckage of the Toyota Yaris motor car in which four foreign nationals perished in an accident along the Braco main road yesterday morning.

IT WAS a day of anguish at the Bahia Principe hotel in Pear Tree Bottom, St Ann, yesterday as staff members reacted with shock and dismay at the horrifying news that four of their colleagues had perished in an early-morning crash along the Braco main road in Trelawny.

"You could say we are all in mourning, because while we might not know all of them (the deceased) well, they were our co-workers here at Bahia Principe," a staff member, who asked not to be identified, told The Gleaner. "Many persons have cried openly ... this is a sad day for all of us."

The deceased men, said to be natives of the Dominican Republic and Spain, were identified by the police as Sergio Gonzales, Garvin Jes?s Arias, Oliver Torres and Ruiz Farael. One was said to be a manager at the hotel while the other three were listed as electrical engineers.

Efforts to get comments from the hotel's management proved futile, as The Gleaner was told that all senior managers authorised to speak on behalf of the hotel were locked in a meeting, which reportedly went on for several hours.

"I have no idea where they were coming from at that hour of the morning, but from all indications, they were heading back to St Ann," said the Bahia Principe employee. "I feel really sad for the respective families, as the death of a loved one is always tough to accept."

According to reports, shortly after 4:30 a.m., the Toyota Yaris motor car in which the men were travelling drifted into the path of a tractor trailer that was travelling towards Falmouth, causing the collision.

"The car drifted into the path of the trailer, and you could see that the (trailer) driver was trying his best to pull away ... . The car was ripped to pieces ... trapping the men inside ... believe they were all killed on impact," a motorist who said he was travelling behind the car told The Gleaner.

"The impact caused the trailer to get out of control and crash into a rock before it overturned."

The tractor trailer driver was rushed to hospital but it turned out his injuries were not serious, so he was treated and released.

While not blaming the accident on speeding, Superintendent Wilford Campbell, the commanding officer for the Trelawny police, nonetheless noted that motorists have a penchant for speeding in the area.

"This is a difficult stretch of roadway because it can be slippery at times ... . That is why we continue to warn road users against speeding in this area, " Campbell said.

The Braco main road has had a long history of fatal accidents, prompting police to institute numerous measures, including speed traps. However, errant motorists continue to speed.

"They will cut their speed when they are approaching a checkpoint, but as soon as they go through the checkpoint, they will start speeding again," said Campbell.

"We are using the tragedy to again warn motorists against speeding, because what happened here this morning could happen to them."

In the meantime, Dr Lucien Jones, vice-chairman of the National Road Safety Council, said the incident was "a disaster of no mean order" at a time when the nation was already struggling to deal with the rising number of road fatalities.

"... Despite recurrent events like what happened this morning, leaving families and loved ones to mourn, sometimes for years, and oftentimes with an attendant dire financial burden, we have tended, as a people, to continue to use the roads with less care and responsibility than is required," he stressed, while expressing regret at the deaths of the victims.