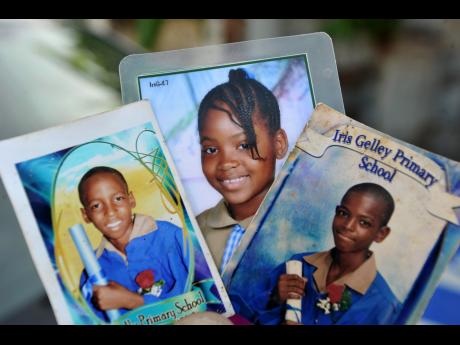 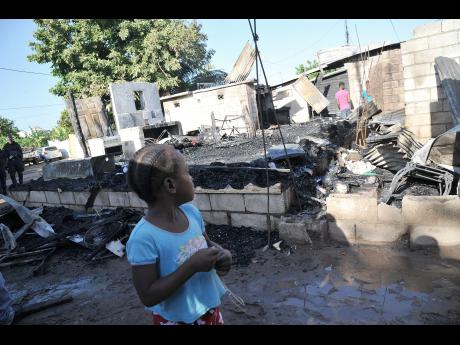 Norman Grindley
A little girl looks at the remains of a burnt out house after three children perished in an early morning fire in Jones Town, Kingston, yesterday morning.
1
2

Less than a week after she shared the sad story of how a neighbour made inappropriate passes at her, the home of nine-year-old Abigail Reid was allegedly set ablaze yesterday morning while she and her two older brothers slept. Despite the efforts of residents to save them, none made it out alive. The three children perished in the blaze which destroyed their two-bedroom board house in the informal settlement of Hopeful Village, Jones Town, south St Andrew.

The other deceased siblings have been identified as 15-year-old Leonardo Morris, of Excelsior High School, and 18-year-old Bebeto Harris, who was a student at Tarrant High School.

According to the Corporate Communications Unit (CCU), police records up to yesterday revealed that six persons have so far been killed in fires since the start of the year.

While declining to comment on the alleged inappropriate passes made at the nine-year-old girl, head of the Kingston West Police Division, Senior Superintendent Steve McGreggor, said a relative of the victims has been taken into custody.

"We have collected several statements and an uncle of the victims is being questioned," SSP McGreggor told The Gleaner yesterday.

Meanwhile, Patrick Gooden, senior deputy chief in charge of operations in the Fire Department, said his department could not confirm the allegation of arson at this time. "We have some initial information that is pointing to a family member who is having some mental challenges. He would have been the person that they saw from yesterday with some amount of gasolene, but that has not been confirmed by us and so we are not able to say definitively that that is the case. We have investigators on the scene. I am not in contact with them as to whether or not they have arrived at a conclusion as yet."

Reacting to the deaths, Education Minister Ronald Thwaites expressed regret and pledged that the ministry's trauma team would be dispatched to offer relatives and the school community any needed emotional support.

At the Iris Gelly Primary School, the institution Abigail attended, teachers were overwhelmed with news of the tragedy and could not take part in their regular devotional exercise.

"We just prayed with the students and the guidance counsellor. Teachers and students wept openly," said Veronica Gaynor, the school's principal, who said that a fourth sibling, who attends Alpha Academy, escaped the jaws of death because she did not sleep at the home that night. "The victims are all past and current students of this school," said Gaynor.

At Abigail's class, her teacher Shernette Thompson stood at the front of the classroom and sobbed quietly, while watching the students decorate the empty desk, once occupied by the deceased, with written tributes and flowers. Some of the tributes read: "I will always love you," and "Rest in Peace". According to Thompson, Abigail was a promising student with a 'B' average.

"It was just Monday she came crying out to me, telling the story of how a man in the community had made some inappropriate passes at her. We called in her father yesterday (Thursday) and were suppose to meet again today (Friday) to compile a report and send it off to the relevant authorities. She is dead now," one of the grieving teachers at the school told The Gleaner yesterday.

It was a similar atmosphere at Excelsior High.

"Leonardo's death has left his classmates distraught. Our internal counselling team has been having (grief counselling) sessions with them. It was just recently he won a scholarship for his performance here at school," said Deanroy Bromfield, principal of Excelsior High.

It was a neighbour who woke up early and saw the fire and alerted the community.

"I woke up some minutes to 1 (a.m.) to use the bathroom and heard her fading voice crying out 'fire, fire'. It was as if she was crying out for help for some time, but nobody heard her. I then rushed outside and woke up everybody, but by the time they removed one of the windows, the fire was out of control and I heard her voice no more. When everything cooled down, I saw her in a crawling position with one hand partially in the air like she was warding off the fire. It appears as if she was heading under the table," said a tearful Andrea Downer, one of the neighbours.

The informal settlement was transformed into a sea of mourning. Abigail's father, Lloyd Reid, said the last time he saw his daughter was about 10 p.m. on Thursday when her brother came to assist with her homework.