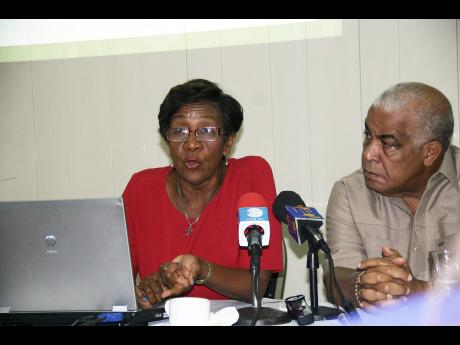 Once known as the 'Land of Wood and Water', Jamaica is facing a serious threat of desertification, which is the transformation of habitable land to desert, by climate change or destructive land use.

"Some of the significant changes have been the conversion of open dry forests to bare lands, particularly along the south coast. At the same time, our broadleaf and swamp forests have been mainly replaced by cultivation, buildings and infrastructural developments. The open dry forests that now stand as bare lands have increased the country's vulnerability to the impacts of climate change and increased our risk of desertification," Robert Pickersgill, minister of water, land, environment and climate change, disclosed on Tuesday.

He was presenting the findings of a land-use assessment survey conducted by the Forestry Department in 2013 and 2014, which provided a comprehensive comparative analysis of forest cover change in Jamaica since 1998.

Pickersgill told a press conference at the Forestry Department's head office on Constant Spring Road, St Andrew, that while there has been an overall 0.41 per cent, or 1,394-hectare, increase in forest cover annually, there has been a loss in the quality of forests, particularly closed leaf, disturbed broad leaf, open dry and swamp forests.

"The loss of our swamp forest poses serious risks to our tourism industry, as well as the success of disaster-management strategies, and destroys the habitat of our essential wetland species," Pickersgill told journalists.

Marilyn Headley, conservator of forests, explained that there is cause for concern.

"What we have identified is that there are quite a few hectares of our dry, what people call scrub land, that we see going, and that is worrying because your dry forest is difficult to replace because it's a slow-growing forest. So if we are removing it without replacing it, it means that we going to end up with a lot more areas with no forest cover on it and a lot of them are by the coast."

This is cause for concern especially since the loss of forest cover along the coasts has serious hazard implications for life and property, outside of tourism interests, Headley told reporters.

"It means that your buffer is being lost, the forest at the edge of the coast. We are also losing swamp and mangrove. If you losing the mangrove, you [are] also creating some more disaster-mitigation issues ... . I can't give you the details of exactly how much that change will be and how it will affect us," she said.

Headley was part of a local team that visited Sri Lanka in 2005 to get an appreciation of the impact of the December 26, 2004 tsunami, the undersea mega thrust earthquake that triggered a series of devastating tsunamis along the coasts of most land masses bordering the Indian Ocean, killing 230,000 people in 14 countries, and inundating coastal communities with waves up to 30 metres (100ft) high. It was one of the deadliest natural disasters in recorded history. Indonesia was the hardest-hit country, followed by Sri Lanka, India, and Thailand.

The conservator of forests used that tragedy as a benchmark for potential disaster that Jamaica is courting by allowing deforestation to continue unchecked.