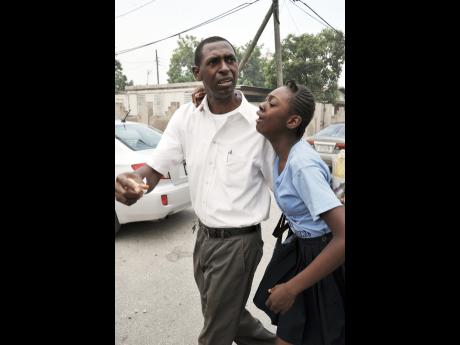 Norman Grindley photo
Albert Braham rushes his daughter from the George Headley Primary School in Kingston to a nearby clinic yesterday. The girl fainted after suffering breathing problems because of the smoke coming from the Riverton landfill. 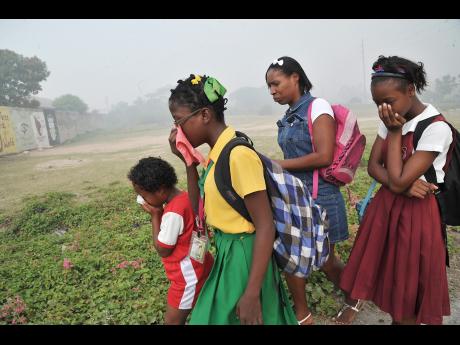 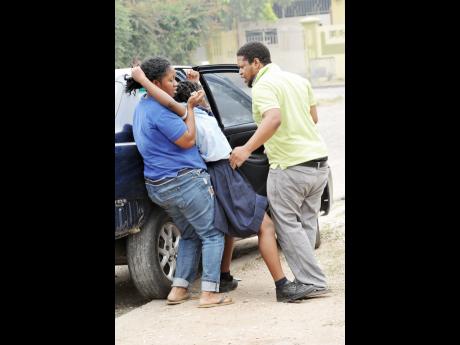 Norman Grindley
The parents of this girl rush to take her to the doctor yesterday. The girl fainted after having difficulty breathing because of smoke coming from the Riverton landfill. 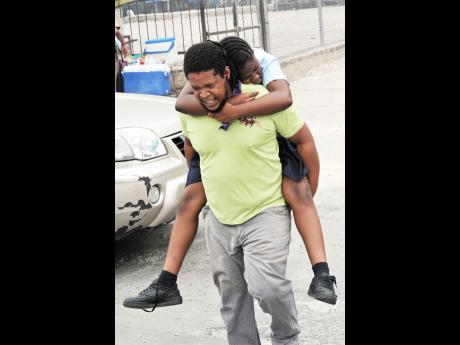 Norman Grindley
A parent rushes to take his daughter from the George Headley Primary School in Kingston, to a nearby doctor’s office, after the girl fainted at the school yesterday. The girl had been having problems breathing as smoke from the fire at the Riverton landfill blanketed the area.
1
2
3
4

Unprecedented and dramatic scenes yesterday unfolded at the Medical Associates Hospital on Half-Way Tree Road in St Andrew, with scores of students from Corporate Area high schools being hastily ushered into the facility in buses, police cars and parents' private vehicles.

More than 50 students were treated at the hospital as smoke from the Riverton landfill triggered a flood of respiratory complications among children.

The private hospital's five emergency rooms were overflowing with students who had to be nebulised. The floors of casualty became treatment areas for many as the X-ray department and other wards were already inundated with students from Holy Childhood, Immaculate Conception, Tarrant, Ardenne and Calabar high schools.

Nurses and other medical staff had their hands full trying to cope with the rush of students into the hospital, many apparently struggling to breathe, while others who had fainted were frantically being revived by medical personnel.

Dr Michael Banbury, chief executive officer of the Medical Associates Hospital, said some 50 students who were treated at the hospital yesterday complained of respiratory difficulties, which he said occurred as a result of the smoke from the Riverton landfill.

He said most of the students treated at the medical complex were asthmatic, while others had panic attacks.

"I have never seen this before in my years of practice," Banbury said, noting that he has been a medical practitioner for 32 years.

"We had to mobilise some of the nurses from the floor to help as well, and a number of doctors joined in and gave assistance."

Ava Smith, whose child attends Holy Childhood High, told a frightening story of how her daughter fainted and fell down the stairs while at school. She blamed the incident on the thick smog from the Riverton landfill that hovered over the Corporate Area yesterday. Smith's daughter was being treated at Medical Associates when our news team visited the hospital.

Within a two-hour period at the Andrews Memorial Hospital on Hope Road in St Andrew, the institution treated 20 students who complained of breathing problems linked to smoke inhalation.

Patric Rutherford, president and chief executive officer of Andrews Memorial, said yesterday's influx of students was comparable only to the onset of chic-V, when the hospital was filled with persons who suffered from the painful illness.

Just before our news team visited the hospitals, principal of Holy Childhood High, Maxine McIntosh, told The Gleaner that her school was severely impacted by the effects of what appeared to be noxious smoke from the Riverton landfill which was burning for the second day on Friday.

"Happily, we had the assistance of our registered nurse and other nurses and staff. So you had people carrying persons in wheelchairs, carrying them to the bus and the car," she said.