12-year-old pregnant girl in State custody... man believed to have abused her in police lock-up 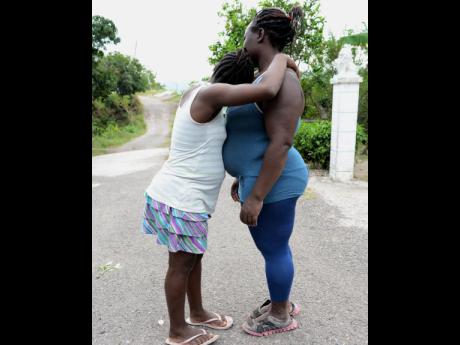 File
The 12-year-old pregnant girl (left) leans on her mother for support.

The Child Development Agency (CDA) has launched an investigation into the sexual abuse of a 12-year-old pregnant child, and the man suspected of impregnating her is now in police custody.

The child's story was first published in The Sunday Gleaner after residents in her Clarendon community expressed concern about her condition. The child, who was 11 years old at the time when she got pregnant, is now in the custody of the State and is receiving psycho-social care. She is seven months' pregnant.

"This is not an isolated case as we have had several reports of minors who have been sexually molested and impregnated, one as young as 10 years old," said head of the CDA Rosalee Gage-Grey in a press release sent out by the Ministry of Youth and Culture yesterday.

When our news team spoke to the child and her mother last week, we were informed that one of the two men who allegedly molested her is a 52-year-old relative. The incident took place while she was on her way home from extra-lessons. However, police officers who are investigating the case said they delayed taking the man into custody because his foot had been recently amputated.

The mother said she only realised her daughter was pregnant after she took her to the doctor. It was the doctor who first contacted the police, but officials from the child's school and other members of the community had also called the Centre for Investigation of Sexual Offences and Child Abuse, the Child Development Agency, and Office of the Children's Registry when it became obvious that she had been sexually abused.

Gage-Grey said that an internal review would be done with respect to the child's case.

"If it has been discovered that any of the officers involved in the investigations have been found to be negligent or derelict in their duties, the necessary disciplinary action will be taken," she said.

The CDA also plans to hire additional investigators on a temporary basis to clear the backlog of child abuse cases that have been reported and are yet to be investigated. The Office of the Children's Registry currently gets about 220 reports of child abuse per week, amounting to more than 11,000 reports per year.