Burned - Jennifer Edwards' contract has expired and will not be renewed 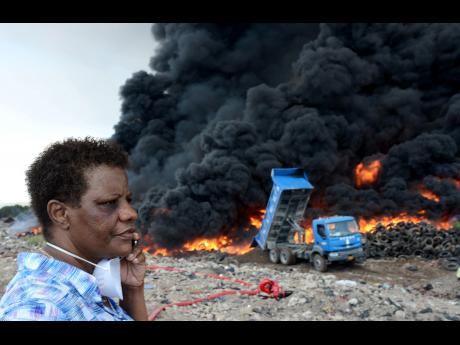 File
Jennifer Edwards, executive director of the National Solid Waste Management Authority at the scene of a fire at the Riverton City dump last year.

The three-year contract of Jennifer Edwards, the executive director of the National Solid Waste Management Authority (NSWMA) has expired and will not be renewed.

In a statement last night, board chairman, Steve Ashley, revealed that Edwards has been asked to continue in the position until next Thursday, March 26.

The disclosure was made as the Riverton City disposal site burnt for an eight consecutive days that dealt a severe blow to productivity and forced closure of some schools.

Ashley disclosed that deputy board chairman, Morin Seymour, will oversee the day-to-day operations of the NSWMA and the regional offices, after this date.

"In accordance with the Government current hiring guidelines, the Board of Directors will invite qualified candidates to apply for the position after which interviews will be conducted and a decision made," the Ashley stated.

After its meeting yesterday, the board confirmed Gleaner reports that Edwards' contract ended on February 24, 2015.

The board also extended apologies to Jamaicans affected by the fire that started last Wednesday.

"We assure the public that we are also extremely concerned about the impact on businesses, education, environment and our children," Ashley stated.

He said the long-term management of the site was being actively reviewed by the authority in consultation with the Ministry of Local Government and Community Development.

The board agreed to create a new position of deputy executive director "with strong financial background". Edwards would have none of this and was "able to convince the finance committee to allow her further time". But even with the additional time, the board said that "there was not much improvement during this period" and it again instructed that a deputy CEO should be hired. Edwards refused.

According to the board, Edwards, at one point, went against its decision and inked an agreement.

"At another time, having agreed that I should negotiate an agreement with a particular union, you then disregarded the agreement arrived at and interjected your own decision without any consultation with me," said board chairman K. Steve Ashley in a letter to Edwards in October 2013.

He told her, "At least one of your act of intransigence going against a suggestion from me has ended up in litigation which has the potential of costing the agency large sums of money, which we can least afford at this time."

In a May 2014 letter, he told her that "the management of the landfill it seems to me is non-existent, and while I am aware of the economic constraint, what I saw at the landfill does not justify the funds now being expended there."

Ashley told Edwards that, "it is quite obvious that either no senior management has been on the landfill for some time prior to the (2014) fire or there is a wanton disregard for the integrity of the site by management".

He added in his 2014 letter to Edwards: "The fact that after I raised an alarm about the condition of the landfill it was dealt with, to some extent, in a very short time is an indication that finance was not the problem."

Meanwhile, as the board decided late yesterday not to renew Edwards's contract and with Local Government Minister Noel Arscott off the island, queries have emerged as to who is in charge at the ministry.

Insiders told The Gleaner that Edwards' contract expired in February but was not noticed until after the fire was lit at the disposal site that left schools closed and unquantifiable levels of declines in productivity.

Arscott's absence was made even more significant when the NSWMA board met to determine if heads should roll for Riverton.

Yesterday, party members suggested Arscott should have cut short his overseas trip as the fire was considered to be a national emergency.

Complaints emerged that Arscott had left his personal assistant Karlene Fenton in charge with no end in sight to the week-long smoke hazard.

At least five queries were made to senior PNP functionaries as to who was representing the missing Arscott and all pointed boldly to Fenton, a member of the National Executive Council (NEC) of the PNP.

She is also a vice-president of the PNP Women's Movement in which Edwards is the president.

When The Gleaner caught up with Fenton yesterday, she quickly declared that she was not holding the fort for Arscott. Asked about the critical board meeting, Fenton said: "I don't know, I wouldn't know, I did not go."

Fenton was also asked whether she was in charge of the ministry.

"No, I am the minister's assistant, I am not the person in charge of the ministry, I think that would be the permanent secretary or the minister of state when the minister is not around ... but they are not here as they have gone to a function out of town."