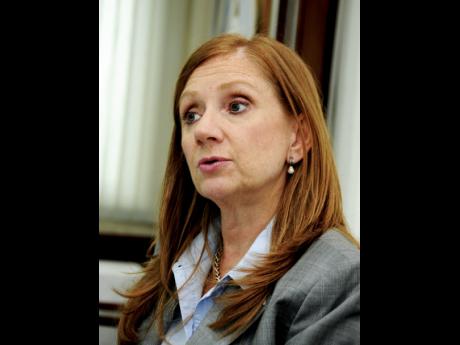 Anabel Gonzalez, senior director of the World Bank Group's Global Practice on Trade and Competitiveness, has outlined a path for Jamaica to successfully grow its economy, on the back of improved macroeconomic indicators resulting from strategic implementation of policies that have been developed.

Jamaica jumped 36 places to 58 among 189 economies worldwide in the World Bank's Doing Business report, and advanced eight places in the Global Competitiveness Index to be ranked 86 of 144 countries. It moved up one place on the Heritage Foundation's 2015 Index of Economic Freedom, reflecting gains in five of 10 freedoms, including corruption.

The country also experienced a five-year high of US$569 million in new foreign direct investments (FDI) in 2014.

"I think Jamaica is laying the foundation for growth and competitiveness, and that is very important because that will open up new investment opportunities for the country," said Gonzalez, in an interview with The Gleaner, following her presentation on day one of the Jamaica Investment Forum (JIF) 2015, held last week at the Montego Bay Convention Centre in St James.

"An increase of US$569 million in FDI is a respectable sum, but there is more room to grow and there are a number of projects in place that will allow this growth," continued Gonzalez, the former Costa Rican trade minister. "... one very important one is the logistics hub initiative. Jamaica is uniquely positioned, and has very clear geographical advantage. I think Jamaica can leverage this opportunity."

The World Bank executive also had high marks for Jamaica's effort in improving its business environment, but said continuity was crucial, especially in strengthening micro, small and medium-sized enterprises.

She is also of the view that securing electricity at competitive cost is important for the economy to move forward.

"Change is very important to move to a better position," the senior director added. "Jamaica has made significant strides in positioning itself in the global economy (but) for a country to grow and develop, it needs to learn new techniques, new know-how from the most advanced in the world, but Jamaica should now capitalise on these gains."

In addition to being trade minister, Gonzalez has also held the post of the president's principal adviser, negotiator and spokesperson on trade and investment policy; director general for international trade negotiations and vice-minister of foreign trade.

She has also served as the director to the Agriculture and Commodities Division of the World Trade Organization. She also worked at the Inter-American Development Bank as senior international consultant on trade and investment and director general of the Costa Rican Investment Promotion Board.

• Having the right capacities - making sure that the education systems are developing the skills that are in demand by the marketplace.

• Reducing the cost of doing business - reducing red tape and bringing greater efficiency to the economy.

• Confidence - providing confidence to the investors that you have a sound business environment.