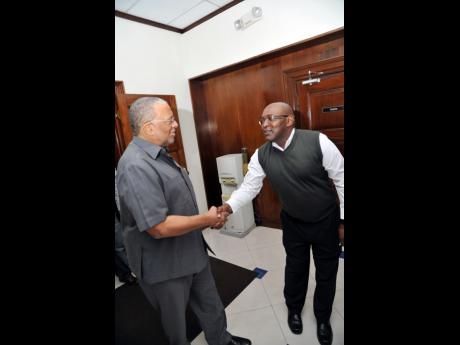 Free health care and free tuition at the secondary school level will not be victims of the International Monetary Fund (IMF)-backed economic reform programme, even as the Government indicates a rough road ahead as it seeks to meet crucial fiscal benchmarks, including a primary surplus target of 7.5 per cent of GDP.

Addressing editors and reporters at The Gleaner's North Street offices last Friday, Finance Minister Dr Peter Phillips argued that even though the State will have to explore options for funding those social goods in the near future, discontinuing no-user or tuition fees is not being considered as this could create the seeds for the rejection of the overall fiscal programme.

"You have to make a judgement of whether it is better to have the society lined up behind a programme with all its difficulties, which involves tremendous sacrifices," said Phillips.

Free health care and free tuition at the secondary-school level were policies implemented in 2008 when the Jamaica Labour Party (JLP) formed the government. But amid resource constraints within the health sector, the Medical Association of Jamaica has called for a review of the no-user-fee policy, with the possibility of making changes.

Phillips argued that the no-user-fee and free tuition issues should be grouped and looked at in the same light as public-sector reform and the call for the mass layoff of workers.

"We have managed to make important gains, and at the level of the secondary schools, there is a system where there are fees that are charged and which are paid. Going into a full-payment system would threaten the second objective, which is keeping the public on the side with the whole programme," said Phillips.

The finance minister added: "It is one of the reasons, why, certainly, in our case, where despite the clamour in some circles that you should have significant layoffs and other things, I don't see how you could usefully ask people to endure a wage freeze and then let go people."

He said that a JLP administration would dedicate the fees from the renewal of casino licences to the health insurance scheme.

Phillips noted that a health insurance scheme was unsuccessfully attempted in the 1980s and 1990s. He said owing to capacity issues within the public sector, the health ministry's focus now is on trying to collect from the 17 per cent of Jamaicans who have health insurance and use the public facilities.

"We do have some proposals, and I think one of the positives is that the country has to begin to look at those issues in terms of how you are going to be financing education (and) how you finance health care. Those are questions which arise, but there is timing issue," the minister said.

Jamaica's economic programme is built around achieving debt reduction and structural reforms for sustained economic growth, and includes a requirement of running a primary surplus of 7.5 per cent of GDP over the life of the four-year programme. It also involves exchange rate adjustment, which has, so far, resulted in the Jamaican dollar losing 34 per cent in the last three years.

Public-sector workers have also had to endure a wage freeze for five years since 2009, and creditors to the Government have had to swap their coupons for lower yielding instruments.

Phillip said that given the nature of the programme being implemented, the Government has had to make a judgement call on "what is the extent of the sacrifices that you add at this point in time".