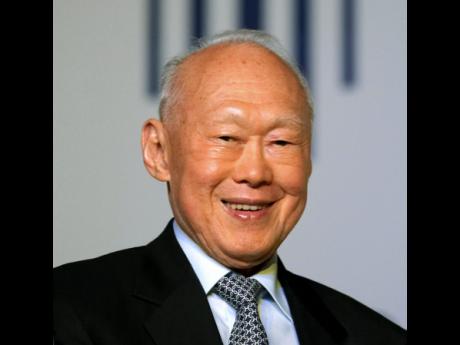 Days after Andrew Holness, the leader of the Opposition, used the floor of Parliament to contrast the economic fortunes of Jamaica and Singapore, Lee Kuan Yew, the man who transformed the latter from a small port city into one of the world's wealthiest nations, has died.

Lee, 91, was admitted to Singapore General Hospital on February 5, suffering from severe pneumonia. He was later put on life support.

Locally, he was frequently referenced by critics of those responsible for Jamaica's economic development. Those critics note that Lee visited the island after Independence in 1962 to examine the growth strategies being employed and successfully transferred some of those ideas to his homeland, while Jamaica floundered.

Yesterday, former Prime Minister Edward Seaga said he was saddened to hear of the death of the man he considered a "good friend".

"He was a top leader in the world in terms of economic development," Seaga said, noting that while Jamaica and Singapore started around the same level of development, "we have fallen short".

Said Seaga: "They stuck with one ideology, one strategy, and there was no shifting away from those. They never had any internal quarrels. (Lee) set a development course and maintained them on that course."

He added: "Their belief structure that they stood by and followed throughout, they were the forerunners in all of this. When they were developing, the other countries weren't doing well."

Recalling their first interaction at a Commonwealth Heads of Government meeting, Seaga said: "When the radicals were talking, we used to go outside and into the lobby, eat fruits and chat."

Speaking during the Budget Debate last Thursday, Holness said Singapore and Jamaica were like a tale of two countries that started at similar levels of development 50 years ago but, today, have secured contrasting outcomes for their citizens.

"Singapore has stepped up and has moved its people from poverty to prosperity. In 1962, Jamaica's GDP per capita in current US dollar terms was approximately US$460 for every Jamaican living in the country at the time. Singapore's GDP per capita in 1962 was estimated at US$470," Holness said.

"Singapore is now ranked 9th in the world on the Human Development Index, which measures quality of life, while Jamaica is ranked 96th of 183 countries," Holness said.

But Finance Minister Dr Peter Phillips, responding to Holness's comments while addressing a forum at The Gleaner's North Street, Kingston offices on Friday said the comparison between Jamaica and Singapore was not a straight one.

He said, however, that the comparisons "can help you but only so far".

"Singapore does not permit a certain level of opposition, even from the media; they close them down. If they think that they are starting from what is of benefit to the country, I don't think that is a civic value that we share," Phillips said.

He argued that if Jamaica were to rise and deliver on the promise of Independence, the country would have to abandon the political culture that is steeped in partisanship and in which people often failed to find "common ground about even what the facts of life are".

"We can't afford to be condemned for another 40 years with less than one per cent growth and 100 per cent growth of the debt. There is nothing that would indicate more unpreparedness for the real responsibilities of Independence than that," Phillips said.

Yesterday, Holness, in expressing sadness at the passing of Lee, a Cambridge-educated lawyer, said while Singapore was far ahead of Jamaica in terms of development, there are some important lessons to learn from his teachings.

"Despite the great distance between our countries, Jamaica and Singapore have a good relationship because of Mr Lee Kuan Yew," Holness said. "Both our nations started out at the same point, and Lee Kuan Yew came to Jamaica to look at some of the things we were doing after Independence to grow. Jamaicans have great respect for the great developer who was able to move his people from the depths of poverty to prosperity in less than a generation."