Security officials keep eyes on extremists ahead of Obama visit 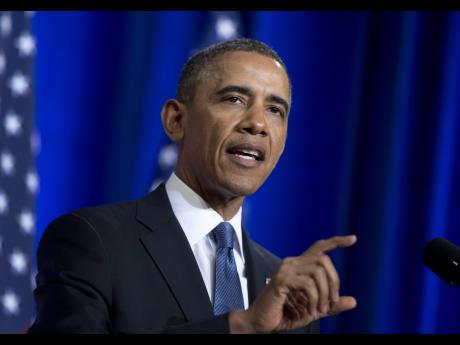 With just over a week to go before the arrival of United States (US) President Barack Obama, Jamaica's security forces, in collaboration with Interpol and US law-enforcement agents, have begun monitoring a watch list that includes local and international extremists.

"We (local security forces), along with our partners worldwide, have begun monitoring the movements of known extremists and their advisers, both locally and internationally," a high-ranking member of the security forces disclosed yesterday.

This was further confirmed by head of the National Intelligence Bureau (NIB), Assistant Commissioner Carlton Wilson, who was extremely cautious in his comments.

"We will be on the lookout for some people. Also, there will be some local folks that we will be monitoring. But in terms of our preparation, every critical area has been activated and will be operating at the maximum level," said Wilson, who stressed that preparations for Obama's visit were well advanced.

The Gleaner understands that as part of the intelligence network, the NIB will be closely monitoring the island's ports of entry during the president's visit.

Information gleaned is that, over the past week, a portion of equipment arrived in the island from the US to enhance the security strategies for Obama.

Head of Counter Terrorism and Organised Crime (C-TOC), Assistant Commissioner Devon Watkis, was reserved in his comments and said a statement on the president's visit would be released at a later date.

In a recent comment, counsellor for public affairs at the US Embassy in Kingston, Joshua Polacheck, indicated that while the schedule for the visit has not been finalised, it has already been determined that Obama would meet with Prime Minister Portia Simpson Miller and CARICOM leaders and attend a youth forum.

Since Simpson Miller announced Obama's visit to the island, Assistant Commissioner Danny Graham, of the Protective Services Branch of the JCF, told The Gleaner recently that local law-enforcement officials have been engaging US Secret Service agents in meetings in preparation for the visit.