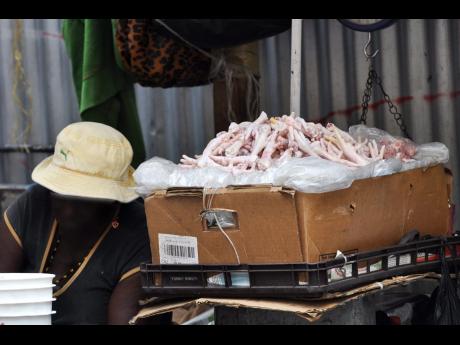 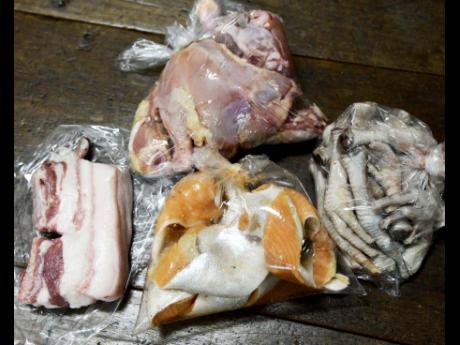 Ian Allen
Discoloured meat recovered from the Riverton City dump being sold on the streets of downtown Kingston.
1
2

Vendors in downtown Kingston continue to sell meat discarded at the Riverton City dump despite a declaration from the authorities that efforts would be made to halt this dangerous practice.

When our news team returned to sections of Spanish Town Road last week, scores of persons seeking to save a dollar were seen buying the low-priced meat despite the foul odour and other obvious signs that they could be putting themselves at serious health risk.

"We did some reconnaissance work and realised what was going on," said Hill.

According to the town clerk, the chief public health inspector for Kingston and St Andrew, Everton Baker, is the one with the power to put a stop to the unhygienic practice.

"The Public Health Department has far more powers," said Hill. "They have the power to arrest and seize; they can take the meat and test it. He (Baker) has far more flexibility in terms of the restrictions he can apply."

The Sunday Gleaner has,

for the past two weeks, been unsuccessful in getting a response from the Public Health Department, which has the mandate to protect the public from those who knowingly sell discarded meat on the city's streets.

The Department is also responsible for ensuring that meat discarded at the Riverton City dump is properly buried.

In the meantime, the KSAC is also struggling to deal with vendors who sell fish on the streets of downtown Kingston.

According to Hill, while the KSAC takes responsibility for this unacceptable state of affairs, a lack of funding is affecting its ability to address this problem.

"That (fish vending) is another issue, because we have now a cultural norm that has set in that we have to break," said Hill. "[While] I will put my hands up quickly to say yes, we may have fallen down on that, it is purely not out of the will to do, but the resources to do.

"We have put most of our efforts on Beckford Street and it is a challenge. So we had to make a judgement call and this is where it is."

However, Hill argued that while fish vending is an issue, the more pressing concern is the need to put a stop to the sale of contaminated meat, as it poses a far greater threat to public health.

"Beckford Street is not public health, but public order. This sale of dumped meat, I think, is far more deleterious to Kingston and St Andrew, because of the potential long-term damage it can cause."