Obama arrives on the rock 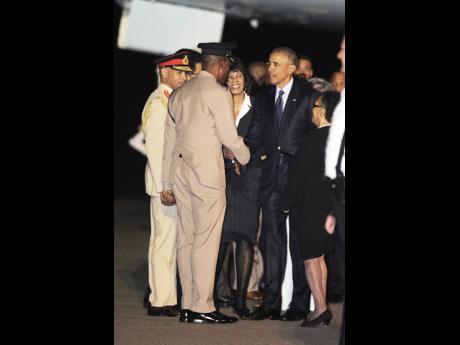 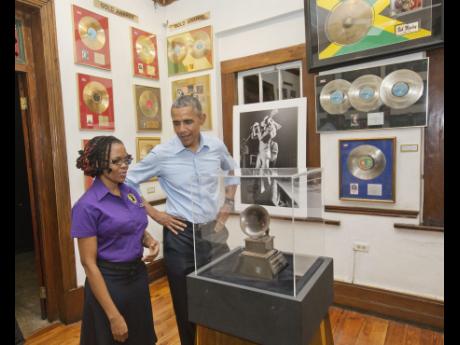 An unannounced visit to the Bob Marley Museum by United States President Barack Obama took most persons by surprise. After landing in Jamaica last night, the president had a yearning to enjoy a bit of Jamaica's warmth, colour, culture and beauty before delving into the official nature of his first visit to the island.

Casually dressed, just before 9 p.m. Obama toured the museum as one of Marley's hits, One Love, played in the background. The late iconic reggae king is known as one of the president's favourite artistes.

"What a wonderful tour," Obama said, following the visit to the museum.

Touching down at the Norman Manley International Airport in Air Force One at 7:31 p.m., Obama exited and waved five minutes later then descended to touch Jamaican soil in this historic visit. His face lit up with a warm smile as he received the signature hug from Prime Minister Portia Simpson Miller, the two greeting like old friends.

Within 14 minutes of landing, Obama was whisked away in the helicopter Marine One to the Jamaica Defence Force's Up Park Camp headquarters on South Camp Road, from where he was expected to be transported to The Jamaica Pegasus hotel in one of the 12 limousines in the presidential fleet.

The 44th US President is among several heads of state and government of CARICOM now in Jamaica to hold talks ahead of the seventh Summit of the Americas to be held in Panama from April 10-11. Obama, who is in Jamaica for just under 24 hours, picks up a full day of activities this morning before he leaves the island later this afternoon.

On a tight schedule, the president and his delegation will first hold bilateral talks with Simpson Miller and her team at the Office of the Prime Minister at Jamaica House. White House officials said Obama is expected to give strong support for Jamaica's work to deal with its debt and fiscal crisis, as well as Jamaica's strong performance over the last two years in working with the International Monetary Fund, the World Bank, among others. Energy and security issues will also be on the agenda.

The president then heads to the University of the West Indies (UWI) Regional Headquarters for a meeting with the CARICOM heads of government.

Addresses are expected to be made by Obama and Simpson Miller, as well as the prime ministers of Barbados, Dominica, and Trinidad on the topics of competitiveness, prosperity, energy and security, among other critical issues.

The CARICOM leaders will engage the US president on issues of mutual interest.

Following that, he heads over to the UWI Assembly Hall for a youth town hall forum. Youth development and empowerment always being one of his major focus, Obama is expected to engage the minds of Caribbean and regional young leaders, as he affirms his commitment to partnering with them on shared interest and their aspirations.

His final engagement in Jamaica is scheduled to be at National Heroes Park where he is scheduled to lay a wreath at the Cenotaph, the monument erected in honour of the thousands of Jamaicans who died in World Wars I and II.

After that, the US president will return to Up Park Camp from where he will be airlifted back to Norman Manley International for his flight to Panama.

But who knows what other aspects of Jamaica the US president would wish to partake of before leaving on this short visit.

Obama's meeting with the CARICOM leaders follows the high-level discussion in January with US Vice-President Joe Biden, private-sector investors and the CARICOM heads in Washington, DC, at the Caribbean Energy Security Summit.

The Obama administration had launched the Caribbean Security Energy Initiative last year to address a potential energy crisis in the region, after Venezuela experienced record-high inflation and food shortages. Under the PetroCaribe Energy Cooperation Agreement, Jamaica has been heavily relying on Venezuela for oil since signing the deal in 2005. The US has been discussing with the Caribbean leaders their use of alternative energy sources.

According to CARICOM, this is their third meeting with Obama. Previous meetings had taken place in the margins of the Summit of the Americas in Trinidad and Tobago in 2009 and Colombia in 2012.

Obama's historic visit to Jamaica comes on the heels of the 33rd anniversary of the first visit to the island by a sitting US president, Ronald Reagan, who came here on April 7, 1982.