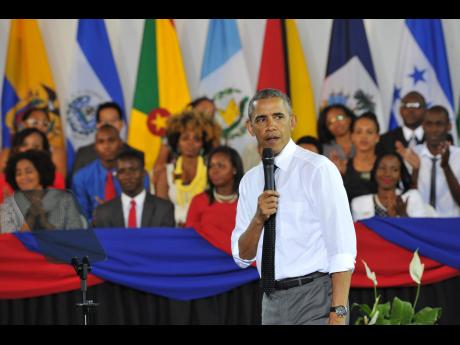 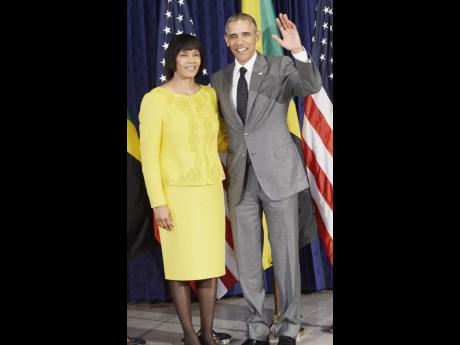 Young leaders from across Jamaica and the Caribbean were elated at United States President Barack Obama’s announced US$70 million investment in their development – through education, training and employment – revealed yesterday at the youth leaders town hall held in the Assembly Hall at the University of the West Indies (UWI), Mona campus.

“I think that is a tremendous move. I have always said the youth is where it all starts and Mr. Obama is showing how important it is to invest in them, and from a young age. We need to invest more in them, engage them, they are the ones to take over, and to not only sustain but improve on what this generation will leave behind,” a beaming UNICEF goodwill Ambassador Shelly-Ann Fraser-Pryce told The Gleaner.

The Olympian added:  “I am really pleased he also emphasised on the importance of investing in early childhood development, because that is where it starts, because investing in children from they are young allows them to grow into promising leaders, it makes a big difference to the positive growth of a nation.”

Under the Young Leaders of the Americas Initiative (YLAI), which the president launched during his historic visit to Jamaica, the close to J$8-billion programme will be pumped into a number of projects, geared to expand opportunities for emerging entrepreneurs and civil society activities.

Engaging a packed room of young leaders from across the Caribbean during his first visit to the island, Obama outlined his focus for their advancement, stating, “these investments will help young people in unemployed, impoverished and marginalised communities and give them a chance to gain the skills they need to compete and succeed in the 21st century.”

He added: “As president, some of the initiatives I am most proud of are the ones that improve my country’s engagement with the next generation.”

Obama also noted that, “more than 100 million people in Latin America and the Caribbean are between the ages of 15 and 24. Most of the region is under 35 and what gives me so much hope about your generation is that you’re more interested in the hard work of building prosperity through entrepreneurship, not cronyism or corruption.”

Initially starting with 24 youth in the pilot phase, YLAI will grow to provide 250 fellowships each year to enable participants from the US and the region to develop joint business and civil society initiatives.

The fellowships will take place at universities, incubators and non-governmental organisations across the US, while follow-on exchanges will send Americans to Latin America and the Caribbean to continue the collaboration.

“Entrepreneurship and small and medium-size businesses are a priority, which means we have to create channels for access to capital, technical training – these are areas a lot of our development aid should go. Instead of just giving somebody a fish, we want to teach them how to fish,” Obama stated.

“And sometimes instead of saying you want to find a job in a big organisation, maybe you can say you want to create something on your own, a new vision. And that kind of creativity has to be tapped.”

The president also stressed the importance of strong investment in early childhood development.

The Central America and Caribbean YLAI builds on the success of Obama's young leader initiatives in sub-Saharan Africa and Southeast Asia.

Building linkages between young leaders across the hemisphere is a central objective of the initiative.

“The power you have as young leaders is to not make excuses for violence. Because there are a whole bunch of folks who have really tough backgrounds, and come from terrible circumstances and are really poor, but they don’t go around shooting somebody," Obama also stressed to those in attendance. "They don’t beat somebody over their head because they look at them the wrong way."

He said what happens in the homes and schools and what children are taught in terms of values makes a big difference in the adults they become later on.

Obama used the examples of two young Jamaicans – gay rights activist Angeline Jackson and inner-city youth empowerment leader Jerome Cowans – who turned their adversities into positive initiatives that are now thriving to further their causes in their respective organisations.

“These are two remarkable young leaders, who are an example of what is possible, even in the most difficult of circumstance,” said the US president.

As part of Obama’s Spark Global Entrepreneurship initiative, YLAI will contribute to the US’s global goal of generating US$1 billion for emerging business and social entrepreneurs by the end of 2017, by helping fellows attract new support, investments and in-kind resources for their business or organisation each year.

Obama also dealt with a number of issues, during a question-and-answer segment.

HOPE FOR THE DISABLED

Twenty-seven-year-old UWI student Shavane Daley, who has been visually impaired for 13 years, said he was quite pleased to hear of the investment for future development. He was, however, disappointed at not hearing a specific plan for the disabled community.

“I guess we are involved in that plan, but I really wanted to hear specifically what that plan was for the disabled community. The development sounds good, so I guess I just have to hope that we are included and included equally,” Daley stated.

For 11-year-old Reajean Bennett, from Allman Town All-Age School, “this was very exciting. I learnt that no matter what happens in life, don’t give up, chase after your dreams.”

Glesia Reid, a 21-year-old UWI student, said: “He was really impactful and interactive. His views were very diplomatic and showed how we can approach certain things from a Jamaican context.”

Following Obama’s historic one-day visit to Jamaica, which included a number of discussions, he is now in Panama with heads of state and governments of CARICOM, as well as Cuba, for the two-day seventh Summit of The Americas.