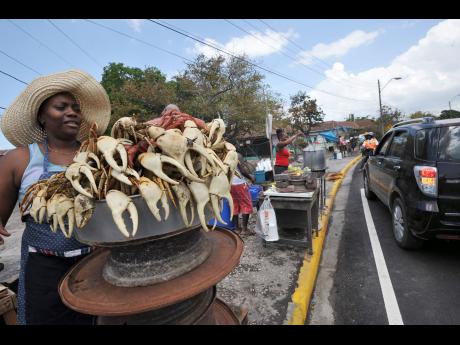 With the visit of United States President Barack Obama out of the way, crab vendors were yesterday back at their familiar location at the southern end of the National Heroes Park in Kingston.

Unlike Monday, when they were wearing frowns and scowls, the vendors were yesterday sporting broad smiles, although they were operating in intense heat, without the shade once provided by their stalls.

For them, yesterday's return signalled a new beginning after their stalls were demolished by personnel from the Kingston and St Andrew Corporation (KSAC) on Monday.

Sandrea Falconer, minister with responsibility for information, said on Tuesday that the decision to remove the stalls was triggered by security concerns ahead of Obama's visit.

But yesterday, the vendors were thanking both Mayor of Kingston Angella Brown Burke and Member of Parliament for West Kingston Desmond McKenzie for their interventions.

Walker, a mother of five, lost her mother, a former crab vendor, on Wednesday.

"Out of bad comes good," she said.

Walker said that she was looking to the future with great hope and optimism.

"We are really grateful and are looking forward to the stalls that will turn our area into a tourist attraction," she chuckled. "We have been wanting that for many years."

Walker described the feeling yesterday as a far cry from Monday when she and other vendors woke up to the demolished stalls.

"It's really great to be back. We will be going home with two shillings in our pockets," she smiled.

She told The Gleaner that not all vendors had returned, but she expected the full gamut to be out on Monday.

It was bustling when a Gleaner team stopped at the area that appeared different without the stalls.

With buyers out in their numbers, The Gleaner queried where they accessed crabs all year long. Another vendor disclosed that they had a stream of suppliers from Westmoreland, St Thomas, Portland and Clarendon.

"They are always there for us," she said, pointing to one who had come on the scene to welcome the vendors' return to the location that had become a fixture in that section of Kingston.